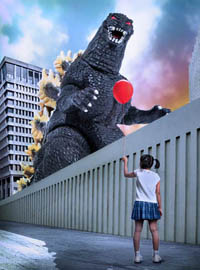 In the real world, radiation is a type of energy that we’ve come to associate with the destructive effects it has on organic material and the occasional cold plate against a broken body-part during the brief unpleasantness of an X-Ray. But in the hands of scifi authors and movie directors alike, radiation is the ultimate tool — a (misunderstood) scientific concept that society at large understands as “the thing that makes big, scary monsters big and scary.” What more could you ask for?

From Godzilla to the Golden Age of comics, the implausible effects of radiation in worlds where anything is possible has been crucial to some of scifi’s biggest players. And why shouldn’t it? It’s not as if the fictional development of radiation should be constrained by the pesky strictures of science and fact. Oh no! A little dose of simple radiation will do the trick as countless classic monster movies show; altering the effects of specific types of radiation, or simply inventing whole new spectrums of radioactive energy can suit your fictional purposes works just as well.

Of course, the reigning king of radioactive rabble-rousers is Godzilla . A little atomic fallout and one sea creature that was hardly a punctuation mark in the tale of the planet becomes the terror (and savior) of Japan, the star of 28 films, and a cultural icon. Naturally, a monstrous lizard needs enemies, for which radiation also sufficed as an origin for — and aid to — begetting nearly half the Godzilla rogues gallery.

But it’s the secondary effects of radiation that remain some of the most interestingly, and hilariously improbable. Douse a spider in radiation and you’ll have a dead spider — anyone knows that. But douse a spider in radiation within the confines of a comic book and it’ll bite someone, say, a high-school kid on a field trip. Defying death, just like the spider that bit him, the nerdy kid will gain incredible abilities, using them to fight a never-ending cast of villains and make out with Kirsten Dunst upside-down in the rain.

However it’s not all fun and games when it comes the gifts endowed by a dip in the radioactive brine, as Troma is all too fond of reminding us. Though the superheroic effects of irradiation on 98 pound weaklings appears consistent, The Toxic Avenger wasn’t quite lucky enough to gain a chiseled profile along with his abilities… though I think most scifi fans will agree that superhuman size and strength — even at the cost of looking like a half-mashed potato — is worth it.