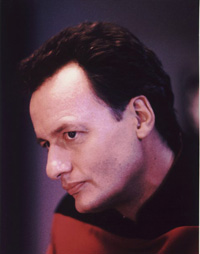 Thank god for Q. Or — since Q within the Star Trek universe is a god — perhaps we should say, “Thank Q for Q.”

Q is only one of two characters in Star Trek lore who have shown up in all three 24th century Star Trek shows (The Next Generation, Deep Space 9 and Voyager). Curiously, the other character to share this honor is the Ferengi Quark. Star Trek clearly had something about the letter Q… chalked up by fan lore to Gene Roddenberry’s fascination with Janet Quarton, the first president of the UK Star Trek fan club.

Regardless, within Star Trek canon, Q is best described as a rogue, Mephistophelean godling. Although he generally means well, as far as that sort of thing goes, Q is usually referred to as “obnoxious”, “interfering” and a “pest” by the Starfleet captains who encounter him. No wonder: Every time Q pops in to visit, something generally goes catastrophically wrong.

Q’s first encounter with the Federation was aboard the USS Enterprise-D in Star Trek: The Next Generation’s
premiere episode, “Encounter at Farpoint.” Dressed in sumptuous
emperor’s robes, Q kidnapped the Enterprise crew and dragged them
backwards in time, to a post-apocalyptic 21st century court room, where
he put them on trial for being a “dangerous, savage child-race.” Picard
convinced Q that they were ready to explore the stars peacefully, which
he somehow managed to do by freeing a couple of cosmic jellyfish from
being used as space stations. No, it didn’t even make much sense at the
time, but Q seemed happy with the results… the first indication
within Trek lore that Q was not as dangerous as his god-like powers would first seem to indicate.

Over the course of the next seven years, Q would make eight more
appearances on the USS Enterprise-D. Q was the entity responsible for
hurling Picard and his crew into the path of a Borg Cube after Picard
bragged that humanity was ready for anything. Although the action
seemed malevolent at the time, and the Enterprise was almost destroyed,
the action ultimately betrayed Q as deeply concerned with the welfare
of humanity: If he hadn’t warned the Federation about the existence of
the Borg before they reached Earth, they would not have been able to
successfully repel them.

Q was particularly fascinated with Picard. When Picard “died”
because of a malfunction of his artificial heart, Q offered Picard the
chance to relive the incident which had caused him to lose his heart in
the first place. Picard accepted, but as he changed his life, he
realized the event made him the dynamic, courageous explorer of his
later years. Ultimately, Picard decided to be stabbed in the heart
again, reclaiming his identity and earning a smile and a wink from the
mischievous God.

And just as Q appeared in the first episode of The Next Generation,
he appeared in the last. In the episode “All Good Things…” Q
re-appears to Picard seven years after the Encounter at Far Point,
claiming that humanity’s trial never ended. He then splits Picard
between three time periods (one in 2364, one contemporary, and one in
the future when Picard is a doddering old man) and challenges him to
solve a temporal paradox that will wipe out all life as he knows it.
When Picard eventually solved the riddle, Q congratulated him for being
capable of embracing the more advanced concepts of the universe. His
last words aboard the Enterprise-D? “The trial never ends.”

If there was a captain and a ship that Q found just as fascinating as the Enterprise, though, it was Voyager and Kathryn Janeway. In his first appearance on Star Trek: Voyager,
Q appeared to convince Janeway not to give asylum to a renegade deity
of Q’s race, the Q Continuum. This renegade deity was also named Q.

Janeway’s pluck and Voyager’s curious situation intrigued him. When
the Q Continuum broke out into a civil war a year later, Q reappeared
aboard Voyager to pose an interesting solution to the problem: He would
mate with Janeway and she would give birth to a half-human Q-ling that
would usher in a new era of… well… Q-ness. Janeway refused, but she
managed to help Q end the intergalactic Ragnarok anyway, non-carnally.
As a result, Q showed Janeway a shortcut to bring Voyager back to the
Alpha Quadrant, shaving three years off their journey. His offer was
also incidentally beneficial to the Federation — by doing so, Q
directly (and purposefully) but the crew of the Voyager in the path of
a Transwarp Hub that was being used by the Borg to mount a full-scale
invasion of the Federation, and which Voyager succeeded in
destroying… after using it to get home.

Q has many incidental appearances in spin-off media: He’s a popular
character both among Trekkies (who appreciate John de Lancie’s impish
relish in playing the role) and among Trek’s producers (who
appreciate John de Lancie’s impish relish in getting a paycheck). In
truth, he’s Roddenberry’s alien archetype at its most tedious:
Omnipotent, moralizing and bombastic. But John de Lancie made what
could have been a dreary mouthpiece for Roddenberry’s thoughts on
mankind’s failures into a charming Falstaffian rogue. Without him, Star Trek would never have had a 24th century.