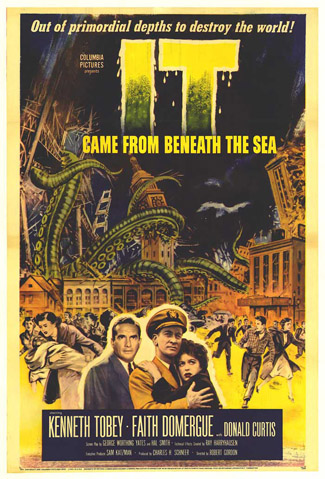 Squids. Cephalopods. Octopi. There is something inherently alien about them, sucking at the scum of the bone-crushing deep, writhing their tentacles, gelatinously gasping when they walk up on shore. Perhaps that is why science fiction has always been so fascinated with our subaqueous tentacled brethren… and so absolutely positive that they mean us harm.

Why octopi? From a mere evolutionary standpoint, there’s certainly something alien about them… they are both extremely intelligent and largely unanthropomorphic. The octopus has two large, bulbous eyes, but it is entirely boneless, with a thick piercing beak and massive, writhing tentacles that can both keenly manipulate objects and choke the life out of its prey. That they live at the bottom of the sea — the only place on Earth we know even less about than deep space — makes them the native extraterrestrials of Earth in a way.

Perhaps that’s why H.P. Lovecraft crafted his most immemorial horror
after the octopus. Great Lord Cthulhu…part octopus, part dragon and
part colossus (at least as far as we know: Lovecraft makes it
clear that no man can look upon Cthulhu and retain his sanity). He is an Elder God from outer space
who came “out of the sky when the Earth was young” to spread evil over
the Earth. In pre-history, Cthulhu was defeated, and now, according to
ancient texts: “Ph’nglui mglw’nafh Cthulhu R’lyeh wgah’nagl fhtagn.”
Roughly translated? “In his house at R’lyeh dead Cthulhu waits
dreaming.” Prophecies indicate that Cthulhu will one day awaken from
his bed in the sunken city of R’lyeh, rise from the depths and bring
Armageddon to the surface. He is the original giant underwater
monster… a kind of creature fondly mimicked by almost every giant
monster movie from Godzilla to Cloverfield.

Of course, scifi cinema is filled with undisputed killer octopuses. Ray Harryhausen’s 1955 classic It Came From Beneath the Sea
is the story of Cthulhu without Cthulhu. In the film, the United States
discovers a giant killer octopus feeding on U.S. war ships in the
Pacific Ocean, before it eventually swims to San Francisco and attempts
to eat the Golden Gate Bridge and the famous Ferry Building. The giant
octopus craze so enraptured science fiction fans of the ’50s that less
than a year later, none other than the cross-dressing auteur Edward D.
Wood Jr. stole a giant octopus from Republic Studios to feature in his Plan 9 From Outer Space prequel, Bride of the Monster .
Unfortunately, watching an asthmatic, morphine-addicted Bela Lugosi
wrestle a rubber octopus in the mud wasn’t quite as impressive as
watching one devour one of San Francisco’s greatest architectural
icons. Never the less, the image remains one of the most ironically
memorable in the entire genre, and while it never elicited screams of
terror, it sure did produce an infinite number of post-modern guffaws.

But octopus overlords don’t just crawl out of the deep to torment
man. They also fly down in space ships. In fact, octopus-like space
invaders is such a common science fiction motif that there’s no way to
do anything but just point it out. Consider the titular cycloptic
monsters of Toei’s 1968 monster movie, The Green Slime. Consider Kang and Kodos from The Simpsons. Consider the Daleks from Doctor Who:
Underneath their crunchy metal shell, they have been revealed as small
and squid-like brains, bristling with pure hate and evil. Consider H.G.
Wells’ Tripods from War of the Worlds …
yes, it’s true, the Tripods as vehicles only have three legs, but that
is supplemented with numerous octopus-like appendages… and the
gasping, gelatinous creatures inside are pure cephalopods.

In fact, octopus overlords are such a timeless trope of the genre that Futurama
— perhaps the purest distillation of science fiction’s cliches into an
infusion of pure wonderful surreality — just made one the big bad in
their latest direct-to-DVD-movie, The Beast With A Thousand Backs.
You know that a giant alien octopus slaps eight simultaneous sweet
spots in the average science fiction fan when a movie featuring an
amorous octopus overlord so large it inhabits its own universe reaches
the Amazon Top 100 in its first week of release.

So keep watching the skies! And the oceans! And your toilets! Cephalopods are
everywhere… and they mean us harm.