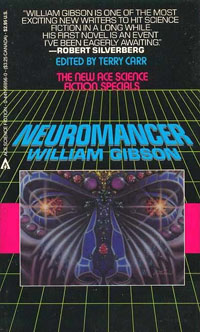 The world of science fiction underwent a profound change in 1984, the year William Gibson’s Neuromancer was released. It’s staggering to ponder just how many movies, novels, and comic books, scifi or otherwise, bear the distinctly cyber-dystopian mark of Gibson’s seminal work. While, yes, a bevy of cyberpunk novels preceded Neuromancer — many influential in their own right — not one of them approaches the novel’s inspirational order of magnitude.

Chief among Neuromancer‘s credits is its popularization of the term cyberspace. Think about that for a second. How many times have you heard the word cyberspace? At this point in our Web-soaked history, it’s almost too ridiculous to ask. And while our strangely tech-centric society isn’t quite the grim vision Gibson had in mind — Neuromancer‘s drug-addled console-cowboy protagonist, Case, has been supplanted by disaffected teenagers punching out messages on palm sized machines that would’ve made 1980s cyberpunk authors salivate buckets — the spirit remains, as do the goggles, affected angst and black leather.

Even as the world races toward sweet, sweet singularity, the dream of the not-so-distant techno-future remains much the same. Casshern ; and The Matrix depict the rapid advance of technology, but those futuristic cities of page and screen are still bleak, oligarchical hubs of illicit activity, “jacking in” is still accompanied by a satisfaction comparable to a sated hunger-fix, the console jockeys are still moody, emaciated, unwilling mercenaries, and time and time again, we find that all roads lead to Neuromancer.

Several adaptations of the novel have been created, including a video game of the same name and a comic adaptation, produced by Epic Comics in 1989. Rumors regarding a film adaptation have existed for years, recently gaining a measure of validity with news of Joseph Kahn ( Torque ) signing on to direct. Any seriously considered film adaptation is guaranteed to come pre-packaged with skepticism, but even with the recent news that William Gibson will be writing the screenplay, it seems unlikely that any cinematic adaptation will live up to 24 years of fantasizing by the book’s legions of fans.

Though “cyberpunk” literature has since evolved into the endlessly (and aggravatingly) debatable “post-cyberpunk” mutant it is today, the themes and elements made famous in Neuromancer are still present and so ubiquitous that it often goes unnoticed, having long since been accepted as de rigeur. Now you know why William Gibson sports that same wry smile in all of his author photos: If you’d been responsible for helping shape the future of scifi as we know it, you’d look a little smug too.