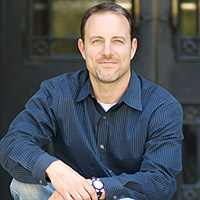 Kirk DeMicco has diligently scribed animated movies for the past decade, including 2005’s Hayden Panettiere comedy, Racing Stripes . This week marks the release of his directorial debut, Space Chimps, about Ham, the grandson of the first chimp in space —  on his own mission for NASA.

Q: What inspired you to write Space Chimps?

A:I remember seeing that scene in The Right Stuff where Chuck Yeager says “Do you think a monkey knows he’s sitting on top of a rocket?” And I just thought, “Well, what if he did?” What if you could put a Chris Farley, Tommy Boy-like character in a big, larger than life adventure? And then what really got me going was that 1961 Life magazine cover of the original Ham, the first monkey shot into space, just chilling and looking all badass. Plus I have a love for all things scifi, so I thought it would be fun to do not a spoof, but a send-up to the genre,.

Q: Which movies do you send up?

A: There’s a lot from movies like 2001 and Star Trek, but really it was just the genre in general. When they land on this planet, for instance, Cheryl Hines’ character is wowed by its beauty and she says, “Oh look the planet has three suns!” And Ham says, “Ah, just like every science fiction involving another planet guessed there would be!” I always thought movies like Men in Black and Galaxy Quest had a great balance between the comedy and the emotion, so that you could get to the point where when you learn the character’s back story, you’re engaged. We didn’t want too many references, because then it becomes a spoof. But if you get the jokes that are expected out quickly, then the other ones can come out. When I worked on Chicken Run, it was like, OK, we got all the war prison movie references out in the first 15 minutes. Then you try to move on and make your own world.

Q: As the director this time around, what was different?

A: The one big thing is that in writing animation, you would sit there and they would ask you to rewrite a scene. And then you’d rewrite the scene and they’d say “Oh well, thanks but we can’t do that… this and that part are already animated.” So when I was directing, I was acutely aware of where we were at all steps. Animation is a very long post-production process. There’s never really a production shoot, no time to step out and say “Action.” You pick up things, you change things, you go back. It’s almost like collage work, so you always have to be aware.

Q: Space Chimps is one of three animated features this summer that take place in outer space.

A: It’s quite amazing, actually. I don’t know what that’s about. Wall-E has a much different tone than ours, but there is one thing: At the height of our hero’s arc for Ham, he has this moment of realization that he can’t return to Earth without fixing the problem. I think this idea of responsibility towards all planets and all life is woven into both films, and for me, that’s the metaphor for why going into space is interesting. Space Chimps is also a little bit different than Wall-E in that it has the historical aspect, so I hope ours might reinvigorate kids to learn about space travel.

Q: Do you ever feel like you’re competing with Pixar when you make these animated features?

A: I think that Space Chimps is an un-solemn-toned comedy that would be more aligned with a Bill Murray comedy like Meatballs than Wall-E. I think that what Pixar does is fantastic, but the fact is maybe there’s more room in animation for other people to tell different types of stories. Everyone throws animated movies together, but they’re really just all movies, especially now given how much animation is in live-action movies. There are certain live-action movies that have 80% animation and no one throws them into our category. Where do the Monster Houses and the Beowulfs fit in? It’s like, can’t we all just live together?

Q: Your next film is an adaptation of Roald Dahl’s The Twits, which you wrote with John Cleese. How did that come about?

A: Somebody remembered that John had talked about liking the book very much and reading it to his daughter when she was a kid. So when they sent it to him he said he would help produce. We got together, and we just started working on it. At some point he was like, “Should we just write this together?” I think of John’s comedy — his love for the surreal and the silly — then I think how different that could be for animated movies, and it sounds perfect to me.