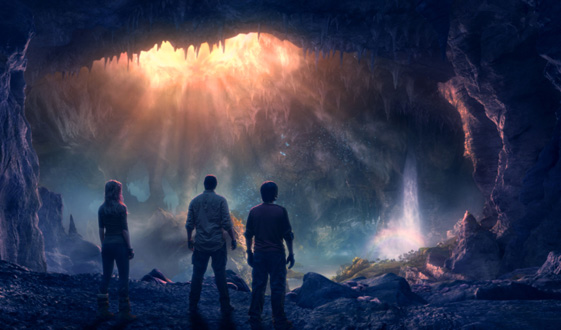 Let’s get this out of the way right off: If you avoid theme park motion simulator rides because they make you queasy, stay away Journey to the Center of the Earth 3-D. This Brendan Fraser-starring 3D stunt is nothing more than a 92 minute ride, disguised a feature film.

Jules Verne’s 1864 novel has seen two previous film adaptations, and more than a dozen television and stage interpretations. Chances are, you already know the basic plot: An explorer (this time, a volcanologist, played by Fraser), and his nephew (a game Josh Hutcherson) head to the center of the earth, with a guide in tow (Anita Briem). There, they find a long lost world full of preserved prehistoric wonders, and scientific improbabilities.

This movie is surprisingly faithful to the book, with one major, meta-fictional change. Whereas in the novel, the explorers are following an old Icelandic text to the center of the planet; in this film, the explorers are following a copy of the Jules Verne novel, Journey to the Center of the Earth. This creates a few logical problems right off: They’re know the Verne novel is describing the places they’re visiting, word for word; however, they don’t realize that they have the exact same “cast,” and plot twists that the novel does. It’s enough to give you a headache…

…Which brings us to the major criticism with the film. J2tCotE:3D (sigh), is the first major motion picture live action release in Real 3D, the new 3D format that pretty much every other film will be released in starting next year. Whereas the old 3D felt flat, Real 3D creates an actual feeling of depth and roundness to the characters. In particular, if you’re looking at a character, and the background is fuzzed out behind them, it looks like the background is the appropriate amount of space away. Or, if Icelandic mountains stretch in the distance, they truly stretch in the distance. However, there are two problems with the Real 3D process, or rather, how it’s utilized in Journey. The first problem is that the glasses are dark; which means, when it’s dark on screen, it’s even darker through the glasses. In a movie where most of the action takes place in underground caverns, this is, at times, deadly.

The second, more intrinsic problem with the movie, is that Journey is essentially a theme park ride that wants to be so much more. There are the requisite “things flying at the screen” — I dare you not to jump out of the way when they do — but most of the really spectacular 3D set pieces are interrupted by actual moviemaking. It sounds silly, but when our explorers get on a mine cart racing as fast as they can to parts unknown, and the camera sets up at the front of said mine cart, you expect a gleeful ride to come. And it did, momentarily… until the movie cut back to reaction shots and dialogue from the actors. This, of course, is fine for a regular film. But for this one? I wanted to be taken on the ride, at least for a little bit longer. Every major sequence is like this, interrupted right before it can soar, as if the filmmakers were apologizing for making something that’s only supposed to be fun.

Regardless of who’s at fault for the stilted nature of these sequences, there are bits that work. Fraser is, as usual, a congenial screen presence and it’s nice to see him once again working in the family film arena, where his earnest delivery and off-hand humor seems perfectly in place. Josh Hutcherson is a great every-teen stand-in, but Anita Briem doesn’t get a lot more to do than stand to the side, and let the boys do their thing.

Though Journey is, by no means, the best family film out right now (that would be Wall-E), nor is it even the most anticipated Brendan Fraser vehicle (that would be The Mummy 3, out in two weeks). However, as a test case for the wide release of a 3D movie, it’s worth starting your Journey now.