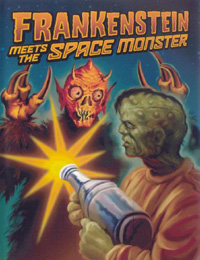 You wouldn’t expect it, given his inauspicious mad science origins, monosyllabic demeanor and general aversion to human contact, but Frankenstein’s Monster is one of scifi’s friendliest creations. As readers of Mary Shelley’s novel know, the monster is last seen departing for parts north, ostensibly to kill himself. But with appearances in a number of on screen classics, the monster (oh, let’s just call him Frankenstein; get over it, people), it’s clear he took some detours along the way. Herewith, some of his greatest film meetings:

Frankenstein Meets the Wolfman
– If you’re going to have Frankenstein meet someone, it makes the most
sense to have him meet the Wolfman. And if you’re going to cast actors
in those parts, you certainly can’t do better than Bela Lugosi as the
Monster, and Lon Chaney as the Wolfman. Ostensibly a wartime cash-in
for Universal, this turned out to be a classic monster movie that lives
up to both of the title character’s good names.

Abbott & Costello Meet Frankenstein
– If you’re going to have Frankenstein meet someone else, why not have
it be the comedy duo of Abbot and Costello? Not only is the movie a
hilarious send-up of more serious movies, like the one above, but it
also features Lon Chaney as the Wolfman, Bela Lugosi in his
better-known role as Dracula, and Glenn Strange as the Monster. Only
Bud and Lou could create a hilarious comedy that also fits in
thematically with the rest of the Universal library.

Frankenstein Meets the Space Monster –  As with the confusingly titled Jesse James Meets Frankenstein’s Daughter , the film doesn’t involve the Frankenstein monster, but a rock and roll astro-robot named Frank. Still, FMtSM
proves that you don’t have to have an earth-bound Frankenstein movie,
or even the original Frankenstein for him to meet someone new and
exciting.

For a full schedule of Frankenstein Meets the Space Monster on AMC, click here.