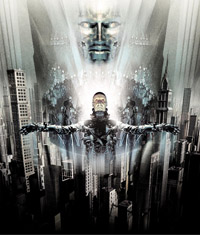 • So word from the Comic Con this weekend is that Marvel’s Ultimate line will now be written entirely by the team behind NBC“s Heroes. Great idea, Marvel… Heroes season 2 certainly has never disappointed anyone.

• io9 posts an insane write-up of the BSG panel. It’s so maddening to realize that for all the actors and crew, BSG is already a thing of the past. Meanwhile, filmed episodes just sit in a vault somewhere.

• Everyone’s favorite omnisexual immortal (or at least Doctor Who’s) is being rumored as the new Captain America. Never going to happen.

• Ten years after it was mangled by nervous studios, Alex Proyas scifi noir Dark City looks to be completely restored. Could this be our generation’s Blade Runner?