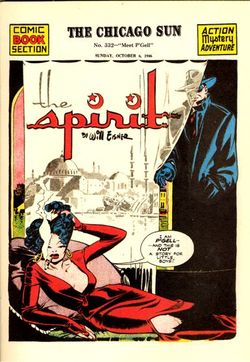 • There is a new Spirit trailer online, and it is god awful… Frank Miller’s giant cinematic loogie spit into the festering eye socket of Will Eisner’s corpse.

• The awesomest board game? “It’s 1941, and you’re sending a battalion of giant combat mechs to attack Russia. Your air support fighters were built using technology you recovered from a crashed alien ship in the Antarctic, and no one has bothered trying to develop atomic weapons because you’re all too busy trying to gather a weird alien energy source known as ‘VK.'”

• Could you ever be as cool as Batman? Well, sure, for a little while… until you died from brain trauma. A scientist says so!

• Intriguingly but not quite successfully, Ballardian tries to link J.G. Ballard with H.P. Lovecraft.

• The genius goons at Something Awful expand Asimov’s Three Rules of Robotics.
Rule 11: “A robot, specifically a big, wide robot, may not pretend to
be a refrigerator and then make a scary noise when a human being opens
it.”

• The Times Online lists the greatest scifi movies never made. Notable, a much-needed defense of David Fincher’s Alien 3! Good on you, Times Online! Alien 3 is unjustly maligned simply because it is not Aliens 2.