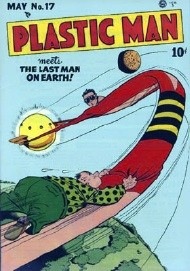 • On the day of the first episode’s release, Joss Whedon talks to Wired about Dr. Horrible’s Sing-Along Blog. I watched it this morning and liked it, but was hardly enraptured by its genius or anything. It is just solid and charming.

• In response to Buzz Aldrin’s comments that scifi was killing space exploration, io9 looks at scifi that have actually helped science move forward.

• Really excellent observation by Cinematical’s Scott Weinberg: “The thing about superheroes is that, on the outside, what with the costumes and the nifty gizmos and all the punching, they’re kids stuff, which is great. But once you scratch the surface just a little bit, you’re dealing with acres of subtext that kids can barely comprehend.”

• The Final Cylon will be revealed early in Battlestar Galactica 4.5, apparently.