Film history is full of great villains, but few display the imagination befitting a great evil scheme. Darth Vader and Sauron employ fairly conventional means to conquer their kingdoms and Norman Bates doesn’t really plan things so much as listen to his mother. But a few film nemeses really put some thought into their machinations, creating convoluted strategies as inspired as the films that spawned them.

Major Spoiler Alert: Since a villain’s evil plan is often revealed in the final act of a film, consider this list to be one spoiler after another.

When your name is the title of a film, you have a lot to live up to as a villain, especially a Bond villain. Fortunately, Auric Goldfinger (Gert Frobe) has the ego and the aptitude to pull it off. With a name like his, you might imagine he’d be attracted to a place like Fort Knox. But he doesn’t plan on robbing it. Any old villain could do that. No, he plans on irradiating it via a dirty bomb, thus making his gold all the more valuable. Now that’s financial sense you can craft an action movie around.

If you want a disinformation campaign done right, do it yourself. Keyser Soze (Kevin Spacey) takes fate into his own hands by (a) recruiting a bunch of ne’er-do-wells to unknowingly give him access to a potential witness before (b) lying about it all to the one detective who might be able to put it all together if he weren’t so convinced he already knew the answer. The beauty of Keyser’s plan lies not in what he attempts to do so much as how he attempts to get away with it. Any time the bad guy’s plan actually depends upon being captured by the police (as it does with Spacey’s other great villainous turn of 1995 in Seven), watch your back.

It’s always nice when an evil plan has historical precedent. Magneto (Ian McKellen) fears that the human race will reject and ultimately wipe out the mutants, so he must make his cause theirs. What better way to do that than to turn the world’s leaders into mutants? Philosophically, Magneto’s reasoning is sound: In a deleted scene on the X-Men DVD, Storm (Halle Berry) teaches a class about the conversion of Emperor Constantine that ended Christian persecution in Rome. Unfortunately, Magneto’s method of mutant-ization doesn’t mutate so much as it kills, but he still gets an A for effort.

Part of what makes Hans Gruber (Alan Rickman) such a memorable villain is his whip-smart sense of strategy. Here he uses it to maneuver the (admittedly dense) cops and FBI into becoming his accomplices in crime. All he needs to do is convince them that he and his team of Eurotrash all-stars are terrorists and, following the rules of engagement, they cut the power to the building, allowing him access to an otherwise impenetrable vault. The only thing more fun than the wit of his plan is the glee with which he executes it, padding his list of bogus demands with release mandates for prisoners he read about in Time magazine. 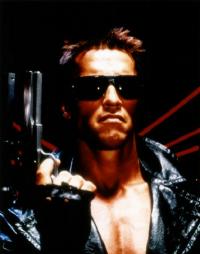 Leave it to evil supercomputers to come up with the most efficient solution to that age-old problem, the human race. Here, Skynet, a supercomputer from the future, sends back a cyborg that looks remarkably like the Governor of California to wipe out the mother of the next Che Guevara before she can give birth. How that’s easier than killing him when you’ve got all of humanity surrounded by thousands of robots in your own time is beyond me, but I’m no supercomputer.

I don’t know that the plan Dalton Russell (Clive Owen) executes to expose a Nazi war profiteer (Christopher Plummer) by robbing his safe deposit box counts as evil, but it sure is clever. By ensuring that his cohorts are indistinguishable from whoever happens to be in the bank at the time of the robbery, he renders police action impotent. Spike Lee weaves a little political allegory into this heist film by evoking the paranoia of the Patriot Act – when everyone is a potential suspect, many are persecuted but none caught. But Dalton’s brilliance doesn’t end there. He allows the hostage crisis to go on long enough for his crew to build a hidey-hole for him inside the bank until the heat dies down. Because the title didn’t have enough meanings as it was.

Why eliminate humanity when you can enslave it? The futuristic machines of this dystopia take issue with Skynet’s scorched person policy, favoring a ‘Wouldn’t they make nice batteries?’ platform instead. To that end, they keep each individual’s consciousness occupied in a dreamworld so their bodies don’t fight back while sundry wires and probes suck the life out of them. It might be more practical, perhaps, to use larger mammals like cows or whales to power the world, but none of those can say ‘Whoa!’ like Keanu Reeves.

3. The Silence of the Lambs

Many serial killer movies focus on villains whose gruesome measures have no greater purpose than to shock. What’s creepiest about the M.O. of Buffalo Bill (Ted Levine) is that his victims’ demise is merely a byproduct of his larger scheme. He wants to be a woman. He’s been rejected for sex reassignment surgery. So he’s going to do the next best thing. He’s going to make a woman-suit. From real women. So when he yells at his latest captive, ‘It rubs the lotion on its skin or else it gets the hose again,’ he’s not just being weird, he’s trying to make his outfit better.

This is probably the most twisted revenge scheme in the history of twisted revenge schemes. Oh Dae-su (Min-sik Choi) is imprisoned for 15 years without explanation by assailants he never sees. Once released (again, without explanation) he spends the rest of the film trying to find his mystery captors and take revenge. Turns out, the revenge is on him. Many years ago, his exposure of an incestuous affair between a schoolmate, Lee (Ji-tae Yu), and Lee’s sister led to the sister’s suicide. Now Lee’s all grown up with the resources to imprison Dae-su and, during that imprisonment, use post-hypnotic suggestion so that when released, he’ll fall for the lovely Mi-do (Hye-jeong Kang) and make love to her. It soon becomes clear why Lee waited 15 years to release Dae-Su. Because that’s how long it would take… wait for it… for Dae-Su’s own daughter to grow up. Yeah. She grew up to become Mi-do. The only thing more disturbing than the revelation that Dae-Su is now guilty of the very crime of which he accused Lee is what Dae-Su chooses to do with that information, but let’s leave the film with one or two spoilers intact, shall we?

Only Lex Luthor (Gene Hackman) could take something as boring as a real estate scam and turn it into an apocalyptic act of mass murder. First, he buys a lot of worthless property just east of the San Andreas fault. He then steals a nuke and launches it into the fault so that the western half of California will fall into the ocean. Presto! All that worthless land is now priceless beachfront property. Just for good measure, he steals a second nuke and launches it simultaneously in the opposite direction, just to keep the Man of Steel (Christopher Reeve) busy. This film also boasts one of the best ever bad-guy-reveals-his-plan-for-no-reason moments when Luthor chastises his underling Otis (Ned Beatty) for trying to sneak ‘Otisburg’ onto the new map of the Golden State.