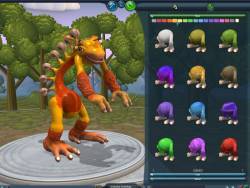 How many times have you watched a horror flick featuring some ravenous
creature of the week… only to be disappointed by how easily the monster is dispatched by the brats it seems so intent
on devouring? No doubt if you‘d
been behind the wheel, those meddling kids would’ve been torn
to ribbons within the first 15 minutes of the movie.

The Spore Creature Creator won’t let you wreak the bloody havoc of your dreams — for that you’ll have to wait until September when the full version of Spore
is released — but it will let you build the beast of your dreams.

Of course, you aren’t limited to tentacled demons covered in eyes. Cute
and fluffy is just as easily achieved as dark and looming, if not
easier. But if the plethora of in-game captured videos
and images already available are any indication, your creations will likely go one of two ways: Horrific or hilariously vulgar. Spore Creature Creator starts you out with a basic torso, the spine
of which can be lengthened, shortened, thickened or thinned
per vertebrae. Then a wide selection of appendages and strange sensory organs (to name a few) can be added in a nearly infinite number of configurations. No single part
is mandatory outside of the basic torso, and all parts can be resized
and reshaped to fit your warped concept.

Naturally,
there are some limitations — like no
psychically controlled floating limbs — but the limitations aren’t so strict as to keep you from crafting a twitching, whimpering mess of enormous fused limbs
and flightless, lopsided wings. Thankfully, any and all mistakes are
easily unmade. Though, in all honesty, creating a misshapen bastard of
nature on your computer and then shouting into the sky, “Dear God, what evils has science wrought?!” has its own appeal. And this is just a taste of what’s to come. When September rolls around, you’ll have an army of
tooth and claw at hand, and a tidepool or galaxy to populate (or subjugate) as you see fit.