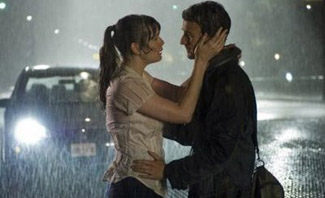 Despite all odds, The Incredible Hulk wowed critics, reignited the dormant movie franchise and inspired a bevy of “Hulk smash box office” puns. And what a strange trip it’s been. In honor of the Green Goliath’s return to theaters, let’s count down a few of the more memorable moments in his colorful past:

5. Hulk Trips on Acid (The Incredible Hulk TV series)
The Bill Bixby/Lou Ferrigno TV series often played like The Fugitive, with on-the-lam “David” Banner performing odd jobs for the various assorted characters he met between Hulk-outs. So when Banner took a job as a roadie for mopey Alice Cooper-like rock star, Lisa Swan (One Day at a Time‘s Mackenzie Phillips), it was only a matter of time before he gets slipped some of the bad stuff. Banner’s acid-induced Hulk-out was much like every other Hulk-out on the show  — music gear was smashed, someone was thrown across a room — only with way trippier camera effects.

4. Hulk Rips Wolverine in Half (Ultimate Wolverine Vs Hulk)
Marvel’s
Ultimate Universe allows creators to do the kind of things
that normally wouldn’t fly in mainstream Marvel comic books. Like Hulk
tearing Wolverine in half and tossing his torso up a mountain. (Don’t
worry Wolvie fans, he got better.) In the first issue of his
action-packed mini-series, Lost co-creator Damon Lindelof’s
had the Hulkster go berserk while being hunted by everyone’s
favorite mutton-chopped mutant. Unfortunately, readers hoping for more
extreme examples of “Hulk Smash” are still waiting, as the series has
yet to be completed. (Lindelof’s a little busy these days.)

3. Bruce Can’t Make Out With Betty (The Incredible Hulk)
Of
all the trials Bruce Banner has gone through, not being able to get it
on with Liv Tyler has got to be one of the harshest. In the new film,
Norton’s Banner puts the breaks on his makeout session with Tyler for
fear of Hulking-out in the bedroom. Even worse, he’s forced to watch
Betty canoodle on his old university campus with Mr. Boring
McSweatervest (Ty Burrell as Dr. Samson). There hasn’t been a more
obvious metaphor for sexual dysfunction in a comic book film since
Tobey Maguire lost his spidey-mojo in Spider-Man 2 .

2. Hulk Turns Gray and Gets a Job in Vegas (Incredible Hulk comics)
Marvel Comics writer (and Star Trek novelist)
Peter David often explored Banner’s mental problems — each of which
seemed to manifest into different versions of the Hulk. One of the
strangest Hulk incarnations was “Joe Fixit,” a gray Hulk who, for some
reason, worked as a Las Vegas casino enforcer. (He also gained his
strength from the moon, making him a bit of a “Were-Hulk.”) Joe Fixit
was the most stylish of the Hulk incarnations, favoring impeccably
tailored suits, which would always rip after each Hulk-out. And odd as
a gray Hulk may seem, he did start out that color.

1. Hulk Fights Angry Mutant Dogs (Hulk)
You can accuse Ang Lee’s Hulk
of being many things (long, dull, pretentious), but safe isn’t one of
them. What other superhero film would spend scene after
endless scene on its character’s tortured backstory, only to have one
of its few action set pieces involve the Hulk wrestling giant mutant
dogs? (Even a poodle, no less.) The scene feels especially strange
amidst the dramatic posturing and Nick Nolte scenery-chewing that
preceded it.

Nick Nadel has written for AOL, VH1, The Onion and HBO’s ThisJustIn.com.