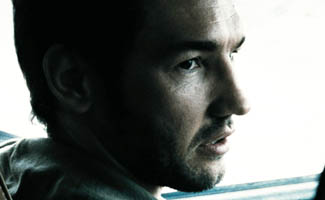 Stunt man Nash Edgerton takes hits in The Matrix , Superman Returns and Star Wars . Now he’s on the festival circuit (including the Sundance Institute at BAM) for his twisted short Spider. He recently spoke with AMCtv.com about doubling for both Obi-Wan and his real-life brother.

Q: Spider is pretty twisted. Where did you get the inspiration for it?

A: It was a combination of a few things: I used to have a rubber spider when I was a kid that I would hide in a different place in the kitchen for my mum to find. Then my brother and I had a run-in with a large spider once while he was driving. Usually if I have an idea, it just keeps recurring in my head and I’ve got to make it. Spider was one of those things that I couldn’t stop thinking about.

Q: How did you get into stunt performing?

A: Growing up I was the kid who jumped off anything I could. But I never really thought of it as a profession — they don’t really suggest you becoming a stunt man at career day, you know? But I got the idea one day, so I looked up stunts in the phonebook and found the number for an agency that represents stunt people. I was a persistent kid and I just kept calling them until I got to meet some stunt people, and when I met them, I kept calling them. 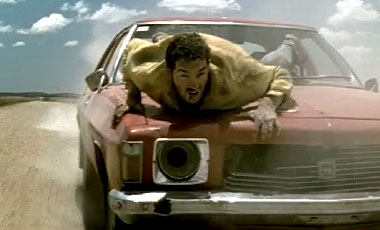 Q: What are some of the worst injuries you’ve experienced?

A: The burns are probably the most painful thing. I got burnt once jumping out of an exploding building. Second degree so it hurt like hell. The rest have been knocks and bruises. In my short film, Lucky, I climb out of the boot of a car while it’s doing 70 kph and — you can see it in the film — my foot slips off the back of the car when I’m trying to stand up. It didn’t seem that bad at the time because I was holding onto the trunk. I realized afterwards that if I’d fallen, the trunk would have closed on my hands, so I would have let go and gotten run over by the tracking vehicle.

Q: What was the hardest film you worked on in terms of the stunts they were having you do?

A: The Matrix was pretty taxing, just because we did a lot of takes. It’s the bigger films that have the time and the money to be really specific about what they want. In Matrix 2 I was smacked around by Trinity. A lot of the roles I had in those films were as guards and cops: You get to say a couple lines, get thrown down some stairs, get the shit kicked out of you.

Q: What was the bigger rush? The Matrix or doubling for Ewan McGregor in the Star Wars prequels?

A: Star Wars was a great experience, especially because I grew up at the right age to be into the originals. And to suddenly get to hold a lightsaber on set was pretty cool. I did a lot of the fight between him and Jango Fett — getting blown up and thrown around a lot. It was intense, we had full-on torrential rain in the studio. I’m wearing all these robes, and the more takes we did, the heavier it would get.

Q: How did it end up that you and your brother Joel were both in Star Wars?

A: That was just totally random. I was already on the film — we were rehearsing stunts a couple of months before we started shooting — and then he just got cast as the young Owen Lars. But we usually work on a lot of the same stuff: We’ll write together, or he’s in stuff that I make. I’ve been his stunt double a bunch of times. It’s kind of funny being made up to look like your brother.

Q: Does he give you a hard time for it?

A: No, he’s very appreciative. The last time I was doubling for him, I was getting hit by this car. It was 3 in the morning, freezing cold and he was all rugged up drinking a coffee. I look over there, and I’m like, “Hang on for a second…Why am I the one getting hit by the car?”