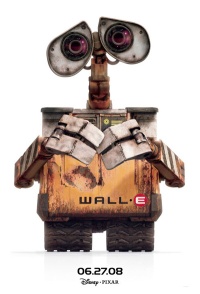 Janitors never get the credit they deserve and Wall-E is no exception. For 700 years he’s gone about his business, cleaning up our garbage, completely unnoticed but, at least, when the movie opens this Friday, he’ll get the attention he deserves. But what about the robots already cleaning up after us? Like the ones that tidy up things like, oh, nuclear waste.

In the 1980s, radioactive material was accidentally pumped off the Scottish coast, forcing officials to ban fishing in the area and post warning signs to stop walks on the beach. And while you can generally count on volunteers to help with beach clean up —  98 tons of waste was removed from the Texas coast in April — it’s a different story when plutonium is involved. That’s a job for robots. The Guardian reports, “Robot submarines are to be used to sweep particles of plutonium and other radioactive materials from the seabed near one of Britain’s biggest nuclear plants in one of the most delicate clean-up operations ever in this country.”

The plant, Dounreay, was shut down in 1994, but trace particles are
still washing up on the beach. Now, robotic subs, Geiger counter in
tow, “will crisscross the sea floor to pinpoint every deadly speck
close to Dounreay on Scotland’s north coast before lifting each
particle and returning it to land for safe storage.” Robots are also
cleaning the facility itself: “Engineers labor away — behind thick
lead sheeting — with robot arms, stripping down fuel elements and
cleaning contaminated equipment.” It will take years and billions of
dollars to return the site to its “pre-nuclear condition,” which means
there will be a vault covered in grass that holds low-level nuclear
waste and high-level waste will be shipped to a “UK nuclear store yet
to be approved.”

So thank you robots for saving our butts. The
communication director for Dounreay said, “‘At the time, engineers were
only interested in building reactors. No one thought how we might
dismantle them.”