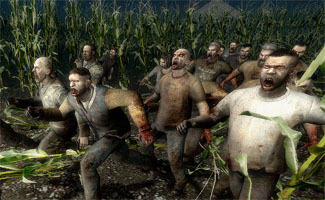 Ask any zombie buff — the possibility of a world overrun by the living dead looms like a dark cloud over humanity. Are you ready? Will you know what to do when well-meaning scientists unleash a brain-rotting plague or when a curse causes long deceased loved ones to claw their way out of earthen pits?

Of course not. Contending with the constant demands of today’s society doesn’t leave most of us with time to think about things like whether a raid on an abandoned grocery store is best done alone, with a group, at night… or not at all. So here are a few study aides to help you defend yourself against a necrotizing neighbor in the ensuing chaos.

First on our list is Left 4 Dead, a multi-player co-op zombie shooter that forces you to rely on your fellow
survivors to make it through a campaign. Left 4 Dead
differs from other zombie games in its dynamic enemy dispersal,
meaning when the dead rise — there will be no way to predict where they will lurk. Unfortunatey, Left 4 Dead is
also currently unavailable, having been pushed back to November for
release. (So should the unthinkable happen before then, you have my humblest apologies.)

Up next: Resident Evil.
Early games focused on the conservation of items and
ammunition because of limited carrying capacity. With Resident Evil 4, the focus on conservation was abandoned in favor of a system with faster gunplay. You can also train against a faster, more intelligent breed of zombie capable of wielding melee and projectile weapons as well as working collectively. (Considering we don’t know what tribulations a zombie crisis has in store, it’s best to assume the worst.)

Finally, we have Dead Rising, Capcom’s 72-hour romp through a mall infested by zombies of the slow, shuffling variety. While it’s better to anticipate the living dead of the quick-moving sort, Dead Rising features a system in which nearly everything in your environment can be used to your advantage. So if you’re ever cornered in a toy store because you just had to stop to pick something up for the whiny kid you should’ve abandoned early on, the knowledge that you can use a soccer ball or plastic sword to aid in your escape will no doubt prove useful.

While by no means a comprehensive syllabus, these games should at least provide you with the basic skills needed to survive the first wave of walking dead. Those of you who choose to ignore these words of caution will be a good distraction while the rest of us escape.