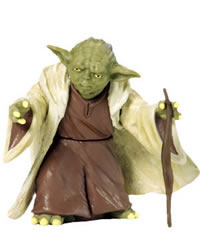 For some, the Jedi are an order of warrior monks, philosophers and mystics… powerful beings who can bend the very fabric of reality with their empathic synergy with all of creation. For others? A bunch of fruity bozos dressed in bathrobes, waving their laser swords around, blathering on about prophecies and “the Dark Side of the Force.”

According to the first Star Wars movie: “For over a thousand generations the Jedi Knights were the guardians of peace and justice in the Old Republic. Before the dark times. Before the Empire.” The later prequels elaborate more on the Jedis role in the Old Republic: They were the dusty, slow-moving bureaucrats at the top of the food chain who, under their watch, somehow managed to hand supreme control of the galaxy over to the Star Wars equivalent of Satan.

So it’s pretty clear that, as politicians and peace keepers, the Jedi were fairly incompetent. However, they were also bad ass,
which has gone far in influencing public opinion. Through the Force,
they have the ability to see the immediate future and react to it,
which explains the long, ballet-like light saber duels that can go on
for minutes at a time without anyone landing a blow. They also have
exceptional Force-enhanced reflexes and motor control… absolutely
essential for anyone waving around a laser sword capable of lopping off
body parts like slabs of butter without wearing a stitch of protective
gear. They can run faster than a speeding blaster bolt and leap over a
Coruscant skyscraper in a single-bound. They can even hurl lightning
out of their hands.

Unfortunately, Jedis don’t seem to spend most of their time doing
any of these things. Instead, they like to shuffle around, mumbling
about the Great Jedi Prophecy, and the Chosen One who will bring
“balance” to the Force. Thanks to his high midichlorian count (we can
deal with that debacle in a couple letters), Anakin Skywalker
is eventually accepted as the Chosen One… and Skywalker responds to
this good news by promptly proceeding to kill nearly every Jedi in the
universe.

There are two different takes on what this prophecy actually meant.
Since Anakin Skywalker became a Sith Lord under the tutelage of Emperor
Palpatine, and since he never managed to kill Obi Wan Kenobi or Yoda,
the thinking goes that he brought balance to the Force in a strict
numeric fashion: The universe was reduced to two Sith and two Jedis. If
so, it wasn’t much of a prophecy — within 30 years, the Jedis had
wiped out the Sith with the aid of Luke Skywalker and, generally
speaking, most people expect the scope of a prophecy to last more than
thirty years.

George Lucas himself seems to endorse the view that Anakin Skywalker
brought balance to the force by eliminating the order of the Sith
altogether when he betrayed Darth Sidious as his last act before dying,
reinstating the bumbling, incompetent Jedi Order to galactic dominance.
This is also a rather bizarre interpretation of the word “balance”…
after all, a see-saw isn’t balanced when a fat kid is sitting on it by
himself.

Whatever the case, the Jedis seem to have made almost no real impact
on the lives of the people living in the Galaxy. Within 30 years of
toppling from power, Han Solo was dismissing Jedis as imaginary, the Star Wars
equivalent of unicorns, and most Imperial Citizens seemed to share his
view. All this despite the fact that Jedis had been the supreme order
of the Galaxy for over 20,000 years and that they had been a ubiquitous
presence as recently as 30 years before the events of A New Hope. Way to reach the hearts and minds of the common man, guys.