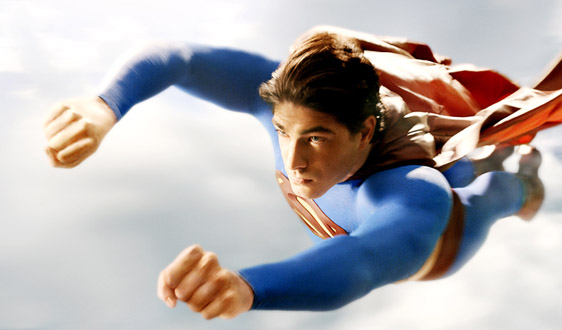 Warner Bros. must be looking very closely at The Incredible Hulk right now. A major comic book franchise that transformed from an audience-alienating debacle into a fast-paced summer blockbuster? No doubt they’re thinking: If Hulk can bounce back from portentous dialogue and mutant dogs, why not Superman? Though a critical and box office success, Superman Returns was seen as a disappointment by fans hoping for more action, and less moping about Lois. While Bryan Singer and Brandon Routh are still attached to the sequel (Superman: The Man of Steel), there is talk of following The Incredible Hulk‘s lead and starting from scratch. (A fan petition wants to take it a step further — to reboot the franchise sans Routh and Singer.) Here are a few suggestions on how Superman can return with dignity.

Let the Big Guy Crack a Smile
Superman is 70 years old and there are a number of seriously creaky concepts floating around in his world. Namely, that the Daily Planet‘s ace reporter (along with everyone else) can’t see that Clark Kent is actually Superman behind those thick glasses. Also, the idea that Clark even still works at a newspaper is pretty outdated. (See, kids, papers are where folks got their news before Google.) None of the basics have to be jettisoned, of course, but they should be playfully tweaked. Richard Donner injected a good amount of tongue-in-cheek humor into Superman , playing to the strengths of the quick-witted Christopher Reeve. Reeve also lent a dash of mocking irony to the character, letting the audience know that it was okay to laugh at a grown man wearing blue tights. Any Superman film that hopes to connect today’s audience should follow in Reeve’s iconic footsteps.

More Giant Robots, Fewer Super Kids
If Singer
does return to the franchise, he could earn geek points by introducing
evil robot Brainiac as a foil for the Big Blue. Outside of Superman IV’ s hopelessly
dated Nuclear Man, Lex Luthor has been the primary villain in the
Superman films. It’s well past time for some new blood. How about
looking to the action-heavy Fleischer Brothers cartoons of the 1940s
for inspiration? After all, they did feature their fair share of giant
robots and mad scientists. And what say we just ignore Clark and Lois’s
little “super tyke?” No one wants the franchise to turn into the
adventures of Superboy and Krypto the Supermutt.

(Brain) Trust the Comic Book Writers
There’s a reason why Iron Man so closely resembled the Marvel Comics universe: Its writers consulted on the film. Jon Favreau and Iron Man producer Kevin Feige enlisted a secret brain trust of Marvel staffers (including fan favorites, writers Mark Millar and Brian Michael Bendis) to help keep them on track. Seeking advice from ace Superman
writers like Geoff Johns and Kurt Busiek would not only please fickle
fanboys, it would also make for a richer and more faithful adaptation.

The Flash: Available for Cameos, Bar Mitzvahs
Iron Man is the launching point for 2011’s Avengers, and Tony Stark’s cameo in The Incredible Hulk helped dilute the early negative buzz surrounding that film. Ergo, The Man of Steel
should be a springboard for a Justice League franchise. Imagine hothead
Flash challenging Big Blue to a friendly race in a bonus scene after
the credits role on Man of Steel. Perhaps the race is continued in a Flash film (which needs to get off the ground yesterday) and then called back in a future Justice League movie. And if for some reason Flash isn’t available, there’s always…

Batman Vs. Superman
The
idea of pitting the two legends against each other has been kicking
around for years. (At one point Wolfgang Petersen was attached to a
version penned by Seven ‘s
Andrew Kevin Walker.) There isn’t a single red-blooded comic book fan
alive who wouldn’t pay to see this titanic tussle on the big screen. So
if all else fails, appeal to the basest of geek impulses and dump a
couple hundred million dollars into Bats and Supes wailing on each
other for two hours — sure beats endless scenes of Brandon Routh
making puppy dog eyes at Kate Bosworth.