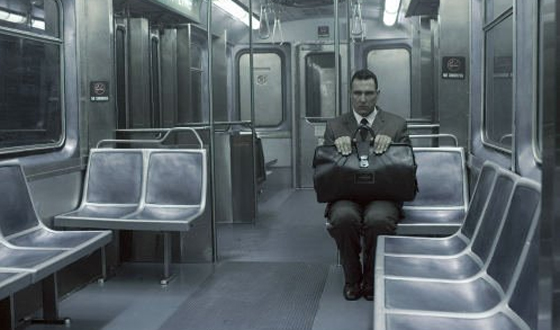 its trailer: “I know that isn’t always the case. It hasn’t even always been the case with my movies, you know? Mea Culpa!” He then adds, “I wouldn’t be talking to you if I didn’t have faith in the movie, if I didn’t know that the people going to see the picture would come away happy.”

You may recall that distributor Lionsgate hinted at sending Midnight Meat Train straight to DVD, and even tried to change its name. “They wanted to take the word ‘meat’ out of the title — that was the first sign that something wasn’t right about this,” Barker told me. “They wanted to call it The Midnight Train, which to me was ludicrous, it would be like taking the word ‘massacre’ out of The Texas Chainsaw Massacre.” Despite how well the trailer and screenings have tested, the studio has also only granted a 100-screen limited theatrical run and seems determined to rid itself of this film as soon as it possibly can. So what’s the deal? Barker has his suspicions.

“I have to believe that some of this, if not all of it, is rooted in an age-old problem,” he ventures, “something that happens when you have a change of management: The work that was put into development by the previous folks is not treated or finished respectfully.” Midnight Meat Train and other horror projects had previously enjoyed the support of Peter Block, former president of the company. “I’ve seen these politics before, and I’ll probably see them again. I know for a fact that we’re not the only ones that are having this problem,” Barker says. “I can think of as many as nine movies which aren’t being well treated right now.”

Barker loves the adaptation, and is certain we will too. “The movie is f—ing great, and it’s not right to stop horror fans who’ve been looking forward to seeing the picture from seeing it on the big screen. I’ve seen it with audiences, and they go nuts.” Barker was even surprised by the violence in Ryuhei Kitamura’s version of the story: “Things you write in a book are imagined through your mind’s eye, which is self-limiting,” he says. “This is Kitamura’s first American release, and there’s no question that it works. I think he deserves to have it seen by the largest audience possible. I know it will be seen in huge numbers on DVD, but that isn’t the same as 500 people in a packed theater.”

Happily, Barker’s other adaptations are progressing full speed ahead, “We’re starting a sequence of movies based on the Books of Blood,” he says. “The first one up is The Book of Blood, of course, and the one that follows will be called Dread. After that will probably be Pig Blood Blues, and so on through the stories — except for those which are beyond us cinematically for whatever reason.”

Barker knows that there’s more at stake here than one poorly-released horror film: “My issue is with the control that individuals have in these cases — people with no interest in the movie as an artistic piece, with no concern for the care that was taken to put it on the screen… and who very often have only political motivations. They’re tossing this thing away as if it matters not at all to them.” The author urges anyone who shares this feeling to contact Lionsgate via his website. “Usually those agendas are fiscal, and that’s what confuses me here,” he points out. Says he of the studio, “If they wind up putting this film on a hundred screens for a week, they’re leaving millions on the table.”