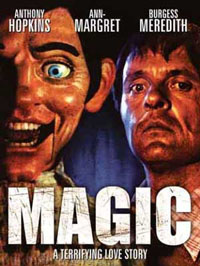 It’s easy to see from Lord Richard Attenborough’s directorial resume what sort of stories he’s interested in telling: Soaring biopics and heavy war dramas. But amidst the hunger strikes and rockets’ red glare, a single horror movie stands out like a sore thumb between A Bridge Too Far and Gandhi, demanding to be taken just as seriously: Magic. Was the movie so far off the beaten path for the avuncular Lord Attenborough that he simply had no interest in returning to the genre? Or did it have something to do with spending so much time around a creepy ventriloquist dummy?

Whatever it was, it didn’t seem to keep star Anthony Hopkins from
continuing to explore his own dark side; the actor went on to work with David
Lynch and Jonathan Demme on some of the most disturbing films of the
’80s. Maybe Lord Attenborough’s just a gentler soul — his extensive
acting career shows a clear bias against the super-scary: Jurassic Park is
about as wild as it gets for him, and even then his character, John
Hammond, saw less dino action than virtually else in the series.
(Notable, considering that in the book, Hammond was actually devoured
by his own creations.)

And even if he really only made Magic to finance Gandhi,
you’d think at some point in the last 30 years nostalgia would get the
better of him and bring him back to the horror fold. Instead all we have from him is one frightening film about a murderous dummy (the fact that it was made
specifically to look like Hopkins only adds to the ick-factor).
Lord Attenborough may have moved on, but he can’t scrub Magic from
his permanent record. That horror fans continue to seek out
and savor the movie must feel punishment for a job well done!

For a complete schedule of this movie on AMC, click here.