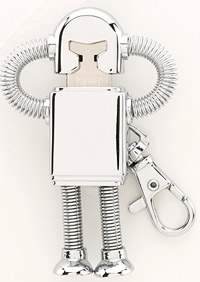 • SF Signal reminds us why we’ve not seen a Green Lantern movie: He really sucks.

• According to British bookies, Trainspotting’s Robert Carlyle is the public favorite to be the next Doctor Who.

• There’s some mouse-over images of the Spirit‘s theatrical posters over on Yahoo. Put your cursor over each and hear a different sultry minx breathe sweet nothings.

• You can pick the mock commercial that appears in Zack Snyder’s Watchmen by visiting the YouTube channel.

• The Ballardian translates another thoughtful interview with J.G. Ballard.

• This is rather curious: Pixar’s Andrew Stanton says they’re not sure if John Carter of Mars will be animated, live-action or both.

• And finally, over at my other abode, this USB Killbot teaches me how to love.