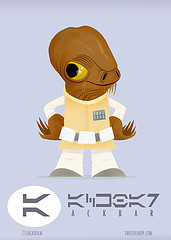 • Finally! Programmable love bots that kiss on command and can be shut off at any time! From Japan, natch. Sign me up for two.

• It looks like the Incredible Hulk could well be the villain of any upcoming Avengers movie.

• Cinematical reviews Mystery Science Theater 3000: The Movie and seems surprised by the paucity of the extras. I’m not sure what they expect: It’s basically an episode of the television show thrown on celluloid. Though some commentary on commentary on an old film would be gnarly.

• Charming ABCs for Star Wars. A is for Ackbar!

• To commemorate a maestro’s death, a list of Stan Winston’s greatest achievements.

• I love the cover of Luke Skywalker and the Shadows of Mindor.

• “It sounds like the setup for a joke: A Nebula-Award-winning author and the Roman Catholic Archbishop of Newark teaming up to write a pulp SF novel.” SF Gospel reviews Space Vulture.