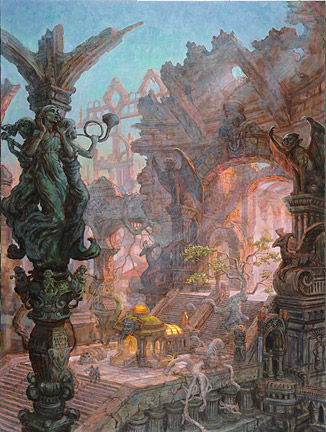 • There’s another new trailer for X-Files: The Truth Is Out There which is about, I dunno, werewolves or something. This one’s really hard to care about. Someone just send me the clips where Mulder and Scully suck face and I’ll be happy.

• Horror: A mash-up of Star Trek: The Animated Series and William Shatner’s “The Common People”.

• McG on Terminator 4.
“Just like it took a long time to get an HD plasma screen in our world,
it took Skynet a lot of research and development to get to the T-800,
and this movie explores that “space between.”

• SF Gospel: What it Really Means When an SF Author Says Religion Doesn’t Exist in the Future.

• io9 speculates that Ridley Scott’s new scifi movie could be an adaptation of Aldous Huxley’s A Brave New World.

• Is “Nuke The Fridge?”
the new “Jump the Shark?” Unfortunately, there were worse scenes by far
in the new Indiana Jones, like the one where a monkey helps Shia La
Boeuf fight the commies because the monkey liked Shia’s haircut. That’s
not exactly terse, though.

• You know, I hate to admit it, but I agree with Michael Bay on this: Spanning one story over two Transformers sequels would be lame.