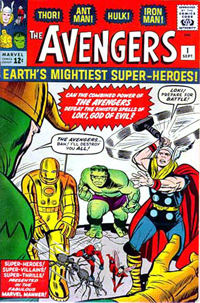 Marvel had their first quarter conference call yesterday, conveniently timed for the Monday after Iron Man’s blockbuster debut, and announced their upcoming slate for the next three years.

What might be of particular interest to those of you who stuck around through the end of Iron Man’s credits is the officially announced Avengers movie, hitting theaters in July of 2011. The other self-produced Marvel Studios are:

This doesn’t include non-Marvel Studios fare, like Punisher: War Zone (December 5, 2008), and X-Men Origins: Wolverine (May 1, 2009); unscheduled projects like Edgar Wright’s Ant-Man; and any non-officially announced sequels like Spider-Man 4, Fantastic Four 3, Young X-Men, and, if the upcoming movie does well, The Incredible Hulk 2.

The conference call also revealed Iron Man 2 will introduce the character of Thor; the Hulk may also make an appearance in Iron Man 2; and the plan is to make The Avengers a rotating team, involving virtually any character in the team’s history.

So let’s play armchair movie producer for a bit, and take a look at what Marvel has set up:

Iron Man 2
Given the weekend’s box office, and the rave reviews,
this is a no brainer. Using the sequel to launch new characters makes a
lot of sense, because even if Iron Man 2 doesn’t live up script-wise to its predecessor, it’ll still have a huge opening weekend, and Thor will receive a proper tease.

Thor
Director Matthew Vaughn’s approach has to be considered risky;
rumors place the film entirely in the mythical realm of Asgard. Again,
though, the Iron Man 2 bump should help, hence the release order of the flicks. (It’s funny to think that Iron Man is now the “established” franchise, given how all the discussion prior to its opening focused on it being an unknown quantity.)

The First Avenger: Captain America
This is a working title, but it gives some indication of
how Marvel Studios is going to go with this project. First, there’s
been concern about a character named Captain America playing overseas.
Giving it a different title gives a little bit of a cushion — though how you’ll hide his costume is beyond me. Furthermore,
with the First Avenger title, and super-close timing to The Avengers,
this positions the film as a must-see prequel to what is probably going
to be the biggest geekgasm film of all time. If I were a betting man,
I’d say that this film will follow one of two plots: Either set
entirely during World War II, ending with Cap encased in ice; or
following Cap half in the past, and half in the “future,” as he comes
to terms with the new world, leading directly into the formation of The Avengers. Either way, expect this to end in a virtual cliffhanger.

The Avengers
Undoubtedly this will be one of the biggest movies of all
time, assuming Marvel Studios continues the one-film streak they’ve set
up with Iron Man, and that the public continues to want
superhero movies. So what’s the plot? As with Iron Man, Thor, Captain America, The Hulk, and Ant-Man floating around there, we should assume it’ll follow the plot of The Avengers #1.
For those of you not familiar, the original team of Iron Man, Thor,
Ant-Man, and the Wasp team up to fight The Hulk, but find out they’re
being manipulated by Thor’s evil brother Loki, who is seeking revenge.
Add in Cap to the mix (which, let’s be honest, wouldn’t be hard to do),
maybe throw in a little bit of the super-soldier program stuff from The Ultimates, and you’ve got your movie right there.

It’s fair to say that Marvel Studios could trip up at any point.
However, as of this past weekend, the future of the superhero movie is
their’s to lose; and they’ve got your Summer schedule booked up right
through 2011.