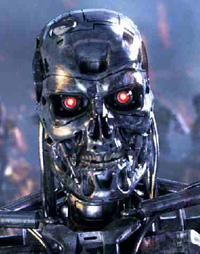 Let’s pause for a moment to take stock of the recent news surrounding the cumbersomly titled Terminator Salvation: The Future Begins. Christian Bale is playing grown-up John Connor. Great, perfect casting. There’s no Arnold. Fine, he’s clearly busy with other things. It’s directed my McG. Unfortunate, but then, no one would have pegged Jon Favreau to deliver one of the best superhero movies ever. Rapper Common has just been cast as a freedom fighter working with John Connor. Well, guess he’s gotta do something now that Justice League: Mortal has been shelved. It’s going to be rated PG-13.

Okay, let’s stop right there. A Terminator movie cannot be PG-13. Here’s why: It’s about robots decimating the human race. For pete’s sake, the new film is set during the big, bloody Terminator versus humans battle that we’ve only seen glimpses of in the previous films. If any entry in the franchise was begging for a “hard R,” it’s this one. Also, the R-rated T2 is one of the most profitable, critically acclaimed, and beloved science fiction films in history. As with Die Hard, there’s a tonal precendent for keeping the R rating. (And we all saw what happened when they stripped John McClane of his foul mouth.)

Simple: Money. Licensing deals have already been signed with
Playmates Toys and Halcyon Games to produce tie-in action figures and
video games. The franchise will reach a bigger and younger
audience, while whining, older fans (present company included) will
still line up to see the grown-up Connor in action. But it’s not like
the R rating is instant box office poison these days. (Knocked Up and every other horror movie can attest to that.) And Terminator
is by its nature R-rated. Stripping the menace and danger from the
franchise kills the very thing that made it so popular years ago.

Back in 1992 when James Cameron changed filmmaking forever with T2,
studios had at least a marginal interest in producing films for adults.
(And if memory serves, there will still plenty of Terminator action
figures and video games in those days.) Cameron, who popularized the
PG-13 rating to a great extent a few years later with Titanic , probably never would have guessed that his dark, violent franchise would end up being peddled to pre-teens.