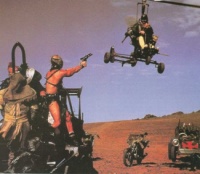 “I was watching that movie Mad Max , you know that movie where gas is so precious that people are killing each other for a few gallons. It was set in the future — I believe it was August.” –Jay Leno

Mad Max movies paint a grim picture of the future for civilizations dependent on oil: When the “black fuel” became scarce, explains the narrator in The Road Warrior , the world became a “whirlwind of looting and a firestorm of fear, in which ‘men began to feed on men.'” Could the current oil crisis turn our world into such a wasteland?

Sadly, the narrator fails to tell us exactly how high gas prices got before “the gangs took over the highways, ready to wage war for a tank of juice.” While law and order remains today, as prices hit $4 per gallon, it’s clear trouble lies ahead. All across the country, gas theft is up: In Mcdonough, Georgia, thieves are going driveway to driveway, in the middle of the night, siphoning gasoline from cars and trucks; Todd Moser, of Washington State believes the gas thieves who stole 800 gallons of gas from a storage tank at his business also stabbed his dog the night before; and in parts of Illinois, people are 68% more likely to fill up at a gas station and “forget to pay” than they were this time last year.

You can buy a locking gas cap for $10 to $15 (next to the siphon
pumps and tubes for $1.99 each) but that won’t stop vandals willing to
puncture the tank and fill up their container as the gas pours out.
Imagine what desperate people will do as prices continue to rise and
if, as analyst Robert Hirsch predicts, it gets up to $15 per gallon. Hirsch told CNBC’s Squawk Box, “The prices that we’re paying at the pump today are, I think, going to be ‘the good old days,’
because others who watch this very closely forecast that we’re going to
be hitting $12 and $15 a gallon, and then, after that, when world oil
production goes into decline, we’re going to talk about rationing.”
What’s worse is his prediction that new types of energy and new
technology aren’t going to save the day. “There’s no single thing
that’s going to solve this problem, because it’s as massive as one can
possibly imagine,” he said.

Having to pay more for food or pay to
check a bag at the airport may be the least of our problems when law
gives way to reckless violence. Motorcycle gangs aren’t fighting to
control oil refineries yet but sales of scooters are up.
Will well-intentioned purchasers, who started out looking for a
fuel-efficient mode of transportation, don hockey masks, join together
and kill for oil? Time will tell.