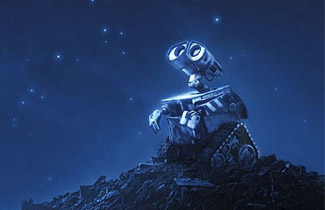 What’s the biggest secret of any movie coming out this summer? Is it how Harvey Dent becomes Two-Face? What Charlize Theron’s part is in Hancock? Or what those Crystal Skulls are, anyway? Nope. It’s why there are no humans on Earth in Pixar’s upcoming scifi feature, Wall-E. And, I’m about to spoil it for you, because it gives you a great insight into how, exactly, Pixar and Disney are marketing this film.

In Wall-E, a lovable little robot is left on Earth to clean up the mess made by humans; we know this much from the trailer. But what you don’t know, and never find out in the trailer, is why the humans left, why there’s so much mess, and what a human looks like.

The reason is that 700 years in the future, human beings are so fat that they can’t even walk anymore. According to CalorieLab, which caught an advanced screening of the movie:

“It shows a future in which mankind literally spends all
day on a giant starship moving around in floating chairs, drinking
liquified food from Big-Gulp-esque cups, and forever surfing (and
chatting) on chair-mounted video screens.”

How’s that as a selling point for a big summer movie? Grab some popcorn, bring the whole family…  surprise, you’re all fat.

And that, my friends, is why the studio is keeping that particular plot point hidden… If anyone knew that Wall-E
was as much about where human beings are headed in a society of
over-abundance and over-consumption, would they be as interested?
Probably not, hence the focus on the lovable robot, and his cockroach
friend. (And as a side note, this is probably the first time in film
history that a cockroach hasn’t been the least sellable point of a
movie’s plot.)

Fitness and obesity blogs are both cautiously optimistic and up in arms, respectively, about this issue. The F-Word, a blog that speaks out about weight prejudice (who, it should be noted, has not seen the film), commented:

“WALL-E specifically singles out and targets obese
people as the primary cause of mankind’s demise, further perpetuating
the stereotype of the gluttonous, slothful fat person. Furthermore, the
film suggests that, in their exaggerated laziness, obese people
disregard not only personal health, but also that of the planets, and
are held up as the cause for the destruction of the environmental
landscape. This is, despite mountains of evidence that show, as a
group, fat people do not eat more than thin people, nor are they less
active and that the so-called “obesity epidemic” has been greatly
exaggerated by self-serving corporate interests.”

CalorieLab, on the other hand, loved the film, and thought it made a
great statement about fitness awareness. Pixar and Disney are
understandably concerned about this plot point; previous Pixar films
have always been grounded in reality, but never have they taken on
social issues in the same way that Wall-E seems poised to. Cars,
certainly, had a message about urban sprawl versus small town living,
but that’s nothing that a million movies haven’t taken on before.

The Weight Issue is a hot button topic, and once people get in the doors for the opening weekend of Wall-E (and they will, in droves), we’re in for a very interesting, and perhaps volatile, discussion of just where America is going.