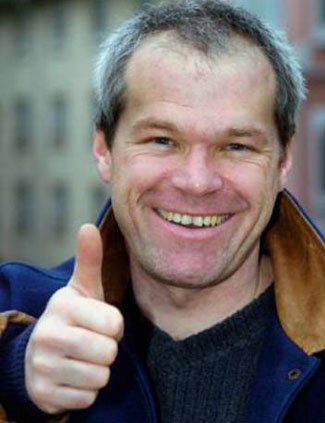 Next week, the world will witness the release of Postal, the latest film by Germany’s Uwe Boll, that country’s greatest cinematic export since Rainer Werner Fassbinder, Werner Herzog and Wolfgang Petersen. And Tom Tykwer. And Florian Henckel von Donnersmarck, Wim Wenders… and well, most of the graduating class of the Munich Academy for Television and Film. The point is not that you can throw a rock and hit at least three other better directors than Uwe Boll, but that only Uwe Boll has received the singular tag, “World’s Worst Director.” There are petitions to bring a halt to his career; each of his films is greeted with howls of derision.

When Wired writer Chris Kohler described Postal, a 9/11 satire, as “90 minutes of flat jokes,”  Boll responded with an email reading, “your review shows me only that you dont understand anything about movies and that you are a untalented wanna bee filmmaker with no balls and no understanding what Postal is…people like you are the reason that independent movies have no chance anymore.” This gave me pause. Had we all, indeed, underestimated Dr. Boll? (He holds a doctorate in literature.) Were we responsible for destroying independent cinema? Had we overlooked the spark of genius in his work? To try to understand him better, I watched his oeuvre — House of the Dead, Alone in the Dark and Bloodrayne — to see what I had missed.

Writing “oeuvre” and “Uwe Boll” in the same sentence is like saying “McDonald’s” and “cuisine” in the same breath, but watching Boll’s oeuvre you do instantly see the hallmark of an auteur: repeated motifs, an all-encompassing world view and an obsession with neck breaking. Boll is a big fan of neck breaking and in House of the Dead and Alone in the Dark, angry zombies break so many necks that you wonder if Boll experienced some kind of chiropractic accident as a child. But his hatred of the neck is nothing compared to his hatred of the head, and all of his movies feature heads exploding in close-up.

House of the Dead
His first American movie, House of the Dead was seen as a sub-par knock-off of a sub-par video game but it is actually Boll’s case against God. “It all started when we came here for a rave,” one character moans. “And now all that remains is the stink of death.” Indeed there is a stink, but is it of death? The overclass get to the rave… and everyone is dead! That has to be a metaphor: In an Uwe Boll film, everything must serve both as itself, and as a critique of itself. His special effects are not only deployed to show half-invisible scorpion dogs, but to show how pathetic special effects really look. His actors are not just playing characters, but their wooden performances reveal the limits of acting.

And the unblinking camera is constantly watching. Boll’s camera sees all, usually from a God-like viewpoint high up in the sky. The camera is a voyeur, peeking out from behind bushes, ogling actresses as they strip off their tops and drooling over their perky bottoms. In Uwe’s universe, God is a creepy pervert. But while House of the Dead is concerned with the death of God, Alone in the Dark is about the futility of knowledge and the limits of knowing.

Alone in the Dark
With his doctorate in literature, Boll understands academia more than any other filmmaker. While some directors portray the world of archeology and museums as dusty places full of books and science, Boll shows us that it is actually a land of scary monsters, heavily armed researchers and girls who wear tight pants. There is a direct link in Boll’s universe between the tightness of a woman’s pants and her IQ, with Tara Reid, who plays a museum curator, wearing the tightest pants of all. Boll also likes actresses who show their breasts. Tara Reid does not show her breasts for his omnipotent camera and so he lamented her performance saying, “Perhaps this is not the genre for her.” But he has nothing but praise for Kristanna Loken who obligingly doffed her top in Bloodrayne; real Romanian prostitutes were also used as extras.

Bloodrayne
Bloodrayne is set in some vague medieval period and cast with slumming actors whose mere presence in the credits reveals that they will do anything for money. Here Boll’s hatred of necks reaches its zenith with scene after scene of the offensive body part being bitten, torn, and mutilated. Bloodrayne is an orgy of decapitation, a sign that Boll has become bitter and angry with thinking, perhaps because it is impossible to think about his movies without suffering a headache. In Bloodrayne he has obviously abandoned making sense: His movies have become the void, devoid of meaning and logic. If art is a mirror held up to reveal nature, then Uwe Boll movies are mirrors that are held up…  and suddenly explode into a thousand stabby pieces into our faces.

Nietzsche said, “If you gaze long into an abyss, the abyss will gaze back into you.” Uwe Boll movies reflect our own empty, dull stares; exposing us all as prostitutes who will do anything for money, paralyzed in a cheap and unconvincing world with no purpose than to have our necks broken, our heads exploded and to watch Uwe Boll movies. But beware! Gaze long into Uwe Boll movies and Uwe Boll will gaze down the front of your shirt and try to see your boobs.