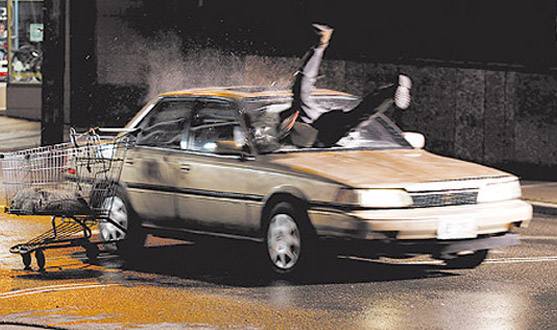 Forget every supposedly scary thing you’ve ever seen in horror movies. Every lame monster, every loser mutant, every boring stalker. The scariest thing going in horror these days is Mena Suvari’s big, pale, pimply pumpkinhead floating through Stuart Gordon’s Stuck. This freakish cranium is big enough to have its own atmosphere and her body dangles off the bottom of it like a vestigal tail. Crowning this planetary monstrosity are cornrows. Tight, blond cornrows. In case you’ve forgotten, Mena Suvari is a white girl and white girls have about as much business wearing cornrows as fat men have wearing Speedos.

Mena Suvari has a lot to apologize for: Starring in the straight-to-video Day of the Dead remake, her godawful performance in pandering urban comedy Beauty Shop , being the love interest in lame 2001 action dud The Musketeer — to name a few better forgotten credits. But her performance in Stuck as Brandi Helper, registered nurse, goes a long way towards erasing the bad taste of her filmography. Brandi is trapped in the warm limbo of an old folk’s home and whether she’s up to her elbows in one patient’s fanny disaster, sucking up to her bloodless boss for a promotion to “captain,” or desperately hitting the High and Low Lounge and washing down a fistful of E’s with a bucket full of Cosmos in an attempt to forget the cozy stasis of her life, she always feels like Brandi, not Mena. Maybe it’s the cornrows.

Zooming at her from the other direction is Stephen Rea as Tom, one of life’s little losers who seems to have absorbed everyone else’s bad luck. He can’t even go to a vitally important job interview without suffering through epic humiliations. Tossed out of his SRO, he clutches his pathetic bundle of possessions to his chest and tries to nap on a park bench, but people like Tom don’t even get to sleep safely in this world of ours and a cop soon sends him stumbling on his way. “Go to the men’s shelter or go to jail — it’s your choice,” the cop says, but for people like Tom, life is just an endless series of these so called choices — where every option is a bad one. Director Stuart Gordon learned horror, blood and black comedy while creating E/R and directing the classic horror flick Re-Animator . Stuck is his particle accelerator, smashing the Brandi atom into the Tom atom and tracking the gory results.

Tom has the bad luck to blunder into buzzed Brandi’s windshield and,
legs shattered, he’s stuck through the safety glass like a smashed bug.
Brandi is horrified that she’s hit someone, and even more horrified
that the bloody mess now attached to her car might keep her from
getting to work on time the next morning. And because this is based on
a true story, instead of calling the police, she drives her car home
and stashes it — bloody Tom and all — in the garage. What follows is
a comedy of bad manners and things unravel quickly as this simple
situation is exacerbated through the application of naked girlfights,
nosy neighbors, saintly children and little puppies who gnaw on bones
that just happen to be connected to their still-living owners. It’s
gross, it’s dirty, it’s ugly and it’s nasty but it’s also wildly funny
and completely unpredictable.

This is the best film that either Mena Suvari or Stuart Gordon have
made, and it’s practically flawless. That said, you won’t have a good
cry or marvel at the special effects because this is well-crafted
story-telling at its best: No showing off. No pandering. No flinching. Stuck is a straight-up shot of the good stuff that plays square with the audience.