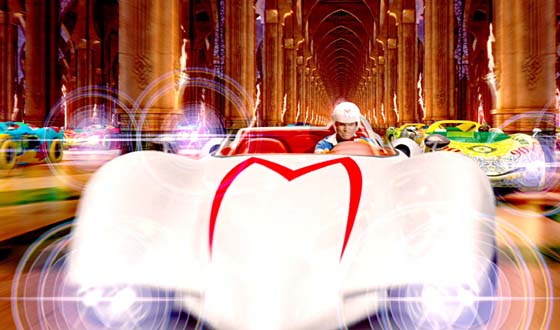 The Matrix, along with being a mainstream and critical success, is also such a pitch-perfect example of cyberpunk that university professors now teach alongside William Gibson’s Neuromancer. V for Vendetta, their much-maligned follow-up, tackled one of Alan Moore’s more convoluted graphic novels and managed not to end up like The League of Extraordinary Gentleman. And now there’s Speed Racer, an esthetically marvelous and totally preposterous film that reproduces every nuance of Saturday morning Japanimation, and refuses to apologize for an ounce of it.

In a way, Speed Racer is both a natural follow-up to and the antithesis of The Matrix. While the latter revels in the goth darkness, the former is blindingly colorful. Speed Racer is not just based on anime — it is anime, and neither a more realistic cartoon nor a more caricatured live-action film have you ever seen. Emile Hirsch somehow manages to purse his lips when he’s speaking so that Speed’s mouth movements are as rigid as the cartoon’s; Christina Ricci’s coquettish Trixie is played with just the right amount of Betty Boop; Matthew Fox even manages to lose his Lost persona portraying the enigmatic — and totally badass — Racer X. (Who else can flip a car going 400 milers per hour and punch another driver in the head at the same time?) And that’s what ultimately makes the film so much fun. Cars rip through the screen at breakneck speed through constantly changing, meticulously detailed landscapes, and all you can do is hold on.

To be honest, Speed Racer is not a “good” movie. There are times when the film stops barreling at the speed of a Mach 5 to talk about the “unassailable might of money,” or tries to justify Susan Sarandon’s presence via extended diatribes on the importance of family. The film also purports to be a family adventure, and services the kiddies with the antics of Speed’s goofy younger brother Spritle (Paulie Litt) and his pet chimp, Chim-Chim. But between the visual noise and the film’s 135-minute runtime, younger kids will run out of gas long before the final credits roll.

Ultimately, the film fits comfortably in between the Wachowski Brothers’ previous efforts. By no means will it ever be as universally cherished as The Matrix, nor as whole-heartedly despised as V for Vendetta. Speed Racer is simply a mouthful of cotton candy. As summer blockbusters go, it’s sweet as hell.