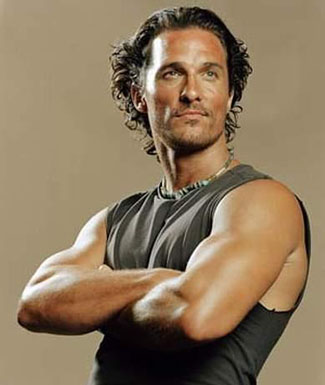 Let’s step into an alternate summer movie reality for a moment, shall we? It’s the first week of May 2008, and audiences are primed for Iron Man. Its star, a veteran actor who is no stranger to controversy, promotes the film on Oprah and even announces a new website celebrating his two decades in film. Flash forward to the premiere: On screen, a military Humvee rumbles through the Afghan desert. Cut to inside, and we see millionaire playboy Tony Stark… portrayed by…Tom Cruise?? No!!!

Yep, it almost happened. And on that disturbing note, let’s take a look at some of the reasons why A-listers should be kept as far away as possible from superhero roles.

They Bring Too Much Baggage
Take Tom, for instance. Cruise circled Iron Man for years, drawn to the playboy-turned-hero character. (And no doubt, drawn to yet another role where he could obscure his famous face. Eyes Wide Shut and Vanilla Sky , anyone?) Sure, the film might have worked if Tommy Boy had been cast. Perhaps the Cruise from War of the Worlds , Favreau wouldn’t have stood a chance.) And with Cruise comes more explosions and more noise. Before you could say “Pepper Potts,” Iron Man would’ve become yet another bloated summer junk-a-thon. And the hype! Think Iron Man is being shoved down your throat now? Imagine the paparazzi photos of Katie and Suri on set, the Us Weekly reports of Tom insisting that Stark’s suit be Xenu-powered. Sure, it’s not like Downey didn’t bring his own baggage to the table. But he certainly didn’t bring Tom Cruise’s jetloads of baggage.

Tabloids Have Ruined Them Forever
Blame Daredevil .
Even if that film hadn’t turned out to be a major disappointment, the tabloid fodder surrounding Ben Affleck and Jennifer Garner’s relationship would’ve still been a distraction. Given our insatiable appetite for celebrity gossip, is it possible to envision superstars as anything but themselves? This is a particular challenge with superhero films, where believing the person inside the suit is essential. Pity poor Wanted. Does anyone care that it’s based on a fun graphic novel? No. They’re too busy wondering whether
Angelina Jolie will show up to the premiere with a baby bump.

It Could Turn into a Nicolas Cage Movie
How
do you solve a problem like Nicolas Cage? The man loves his
superheroes, bless him, and for years he tried to play both Iron Man
and Superman. And ended up with Ghost Rider. (Sigh.) Granted, Cage
is certainly one of our more unique A-listers. There’s drunk Cage ( Leaving Las Vegas ), snarky Cage ( National Treasure ), and even Elvis Cage ( Wild at Heart , every talk show appearance.) But they’re all still Nicolas Cage. If
he’s allowed to play another superhero — and I’m sure he’ll try —
will we buy him in the role?

The Beauty of the B-List
By casting Downey, Jon Favreau scored big by following the then-risky precedents set by Christian Bale in Batman Begins and Tobey Maguire in Spider-Man . (Remember, it was almost Leo DiCaprio in the tights.) And it could also work for The Incredible Hulk, as Ed Norton looks to be the most interesting part of that film. Meanwhile, director Zack Snyder is wisely following the nontraditional casting path with Watchmen, going with respected lesser-knowns like Jackie Earle Haley and Carla Gugino over more marketable stars. Which brings us to Matthew McConaughey as Captain America. Oh, Marvel, have you learned nothing from Iron Man? If Kate Hudson turns up as longtime Cap love interest Sharon Carter,
it’ll definitely be time to hang up your moviemaking shield.

Nick Nadel has written for The Huffington Post, VH1, The Onion,
Toyfare Magazine, and HBO’s ThisJustIn.com. His favorite superhero/actor pairing is Billy Zane as The Phantom.