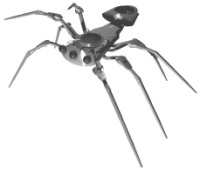 Tom Cruise had to dodge them in Minority Report . Tom Selleck had to catch them in Runaway . In the scifi future, robot spiders are a part of everyday life and they’re a problem. Now, thanks to a military contract, the creatures are going to be a part of our lives; hopefully, they’ll lead us down a better path.

Defense giant BAE Systems has signed a $38 million agreement with the U.S.
Army to create a series of tiny electronic spiders, insects and snakes
that will become the eyes and ears of soldiers on the battlefield. Some will be able to detect the presence of chemical, biological or radioactive weapons.

It’ll be a while before they have minidroids that can fly like a
butterfly or sting like a bee, but plans for spiders like the one
pictured here are said to be well-developed. Program manager Steve
Scalera told the Daily Mail, “The five-year program has just started but we could have them with soldiers within six months, and then continue to develop the concept as the project goes along.”

Meanwhile, BAE Systems has a computer generated video that shows exactly how the tiny invaders would attack. Watch and pray. Robobugs, let loose in the desert, could be our greatest ally in
the war on terror… On the other hand, if Michael Crichton and Steven Spielberg are right, they’ll turn against us.