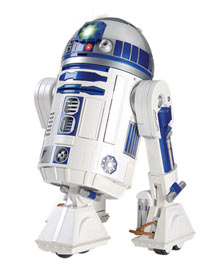 R2-D2 is quite possibly be the most malleable character in all of the Star Wars universe. His mischievous spirit (and garbage can shape) make him both ripe for kitschy merchandising and also a hilarious foil for earnest public service announcements. On the merchandising front, is there anything better for entertaining than this R2 ice bucket? (He even comes with a “Han frozen in carbonite” ice tray.) No regular, boring old ice cubes for your guests: They’ll be enjoying a beverage with mini-Harrison Fords floating in their drinks, thanks to your li’l buddy R2. Also, of all the Wars crew, R2 seems the most likely to have a great time at your next shindig.

Even more ingenious (and prohibitively expensive) is the R2-D2 audio and video projector from Nikko. (See it in action here.) This one deserves a standing ovation, folks. It’s quite possibly the greatest piece of Star Wars
merchandise ever released. First off, it actually makes sense. Instead
of distress holograms of Leia, R2 projects your DVDs, photos, video
games, and more. (And of course, there’s an iPod dock.) Oh, and
also…he moves! Star Wars ancillary merchandisers, it’s time
to pack it up. Nikko just won the war. (If you’ve got a extra three
grand lying around, it can be yours. Hey, that’s only five tax refund checks.)

Completing today’s R2 kitsch trifecta is this wonderful anti-smoking public service announcement from
the early ’80s featuring the little guy puffing away in defiance
of that killjoy C-3P0. First off, why are they hanging out in what
looks like the back of a RadioShack? Also, why does R2 hold his
cigarette like a James Bond villain? And how heartbreaking is 3PO
asking R2 to confirm whether or not he has a heart? Also, I sure hope
they properly dispose of that butt. A protocol droid should know better
than to litter. Maybe they saved that lesson for the next PSA.