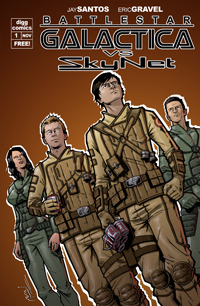 Here’s a killer idea: The crew of Battlestar Galactica finally reaches Earth, only to discover that it has been taken over by the evil computer program, Skynet, and is infested with killer robots. You can almost hear Adama looking at the camera and saying, “Here we go again!” as Starbuck and Lee jump into their Vipers, ready to aid John Connor with the human resistance.

Now, take that idea and translate it into a home-brew, fan comic book created by Jay Santos and Eric Gravel, complete with well-rendered black and white art, smart writing, and an online fan base. And the story should totally work, except I left out one key detail:

In the first issue, which has just been released via BitTorrent, nobody from Battlestar Galactica, or the Terminator series appears. We don’t see any killer robots (well, one, kind of, in flashback), and certainly no BSG characters. In fact, the entire story is essentially, an alternate reality Diggnation podcast, featuring hosts Kevin Rose and Alex Albrecht. Seriously. Ninety percent of the first issue is taken up with the “characters” of Kevin Rose and Alex Albrecht bantering as they record their podcast, making reference to the plots of the first three Terminator movies, and then meeting up with the current hosts of Screen Savers, Kevin Pereira and Chi-Lan Lieu. From promo art, it looks like they’ll be meeting up with Attack of the Show host Olivia Munn in future issues, as well other geek friendly podcast and TV hosts.

This is the equivalent of promising a feature length Star Trek vs. Star Wars movie, where Luke Skywalker and Jean-Luc Picard team-up to fight Vader, who has been taken over by the Borg, and then making the whole first 30 minutes about Ben & Jerry’s.

There are several reasons why this calamity has occurred, the
largest being it’s hard to launch an indie comic book — especially
online. So why not add in as many geek friendly icons as you can,
attract their attention by drawing them (literally and figuratively) in
the most flattering light possible?

There’s nothing necessarily wrong with this idea; young creators
have to do anything they can to stand out in a crowded marketplace.
Except, and get ready for me to nerd out here: It’s totally
inappropriate for both of the universes involved here. BSG and Terminator
are both pretty serious scifi series, and to posit the idea that people
are still interested in Diggnation hosts just palling around while the
world ends, let alone that anyone would be stupid enough to use
the Internet in a future where Skynet has taken over global
communications is unbelievable.

Not only that, but every geek friendly podcast or TV host or blogger
has survived the global apocalypse, and are, in fact, key members of
the human resistance? Really? Despite liking the idea that this greatly
increases my personal chances, it’s also an unbelievable stretch. It
just doesn’t make sense that when you have two Universes which such
rich, involving characters, and deep mythology, that you would waste
time coming from the least creative angle imaginable. Start with BSG, or Terminator, or anything, really… Just not people who make their living commenting about entertainment.

On the positive side of things, the art isn’t half bad, and the
dialogue isn’t terrible. I don’t want to randomly lash out at two guys
who are just trying to live their dream. And the first issue does end
on a relative cliff-hanger, where one character pulls out the old
chestnut, “Whatever you hear or see stays in this room,” which promises
to actually bring BSG or Terminator into the fold.

But if turns out that what’s in the room is Adam Sessler and Morgan Webb previewing a new game for X-Play,
I’m going to personally march over to Jay Santos and Eric Gravel’s
house, and terminate them. Or, you know, start working on my Star Wars vs. Star Trek comic. I’ve already shot e-mails to Ben and Jerry to work in their likenesses.