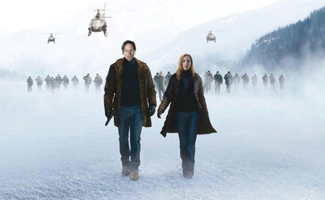 With a little over two months until the release of The X-Files: I Want To Believe, I thought it was time to open up a chestnut we haven’t talked about in almost 10 years: Is The X-Files the next Star Trek?

For those of you who don’t remember discussions from a decade ago, I’ll remind you. Back in ’98, The X-Files was a pretty popular television show, to say the least. Its fifth season ended with an all-time ratings high and 16 Emmy nominations. Not only that, but it had just won the Golden Globe for Best Drama — for the third time in a row. For any television show, that’s pretty huge. For a genre show about aliens, it was geek validation. Talk about a possible franchise, a la Star Trek, was in the air.

But the
filmmakers on the first feature had a lot to contend with: Welcome new fans, make
old fans feel like they were seeing something new, and most difficult
of all, bridge the gap between Seasons Five and Six. To say they were unsuccessful is a little bit of an understatement. Fans were… let’s say, apologetic, for the movie. The TV show lasted for four more
seasons, but between casting changes and a failure to effectively pay off long-running story lines,
the popularity of the series was in free-fall. The “Is this the next Star Trek” buzz seemed to all but disappear.

Cut to 2008, and on July 25, more than 10 years after the release of the
first film, and six years after the end of the TV series, the original
team is back on board: David Duchovny and Gillian Anderson; writers
Chris Carter and Frank Spotnitz. This breeds a degree of
faith in the film, as does the news that the film is a done-in-one “Monster of the
Week” story, rather than a “Conspiracy” story. Marketing-wise, though, things are still up in the air: The recently released trailer
didn’t exactly tear the Internet in half; moviegoers have ranked the film #17 just above The Strangers, and right below Hellboy 2 on  Yahoo!’s Summer Movie Guide.

So what does The X-Files need to do to guarantee that it becomes the next Star Trek?

1. Spend Less Money
Star Trek: The Motion Picture cost an unheard of at the time $35 million to make, and grossed $139 million worldwide. Sounds good, but it was considered a disappointment. The Wrath of Khan , on the other hand, cost $11 million to make, and made $97 million world-wide, which the studio was happy enough with to keep Star Trek movies in production. The first X-Files cost $66 million, and grossed $190 million. This next film costs $35 million, meaning that all it needs is a solid opening weekend, and the movie is already profitable.

2. Tease Your Audience
Rumors leaked out during the filming of Wrath of Kahn that Spock would die in the film. So the filmmakers hastily added a scene at the beginning of the flick with Spock lying “dead” in a hallway, and made a joke about it. Though he did “die” at the end of the movie, audiences were put at ease for most of the running time, thinking the rumor was just a rumor. Similarly, pictures leaked from the set of The X-Files 2, showing Mulder & Scully smooching, an event fans have waited almost two decades to see. Turns out, it was a joke the filmmakers were playing, working off Internet rumors. Or is it?

3. Keep It Fun
Full of metaphysical musings that may have played well drawn out on the small screen, Star Trek: The Motion Picture only confused and bored fans of the original series in theaters. With Wrath of Kahn, the emphasis was on making a fun action movie, set in the Star Trek universe, and it clicked with fans and critics. XF:FTF, similarly, was full of metaphysical musings. And though we know I Want to Believe is a stand alone action-oriented storyline… we also hear writer/director Chris Carter says the movie is really about Mulder’s struggle with faith. Oops.

There’s not a lot that can be
definitively said until I Want To Believe is released on July 25. But once it hits theaters, we’ll see if it’s worthy of another sequel, let alone 10 parts.