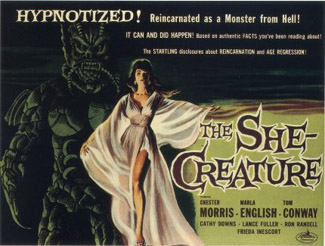 The sexual repression of the mid-twentieth century made it easy for scifi filmmakers: Any horrific powers or transformation you bestowed upon a female character instantly tapped into audience’s subverted fantasies or unconscious nightmares, and became a statement on the times. Films like The She Creature and Attack of the 50 Foot Woman hinted at the women’s lib movement that was on the horizon: You could try to confine womens’ psyches in pretty little packages, but don’t forget that those contents are under pressure, and will inevitably explode!

It’s a theme filmmakers have had a soft spot for ever since. In 1995, Species suggested that the sexual freedom we’ve grown used to was still just an illusion, that our “modern” instincts amounted to little more than a primitive mating dance. Mitchell Lichtenstein’s Teeth introduced vagina dentata as a snappy comment on the zero-tolerance abstinence policy that many communities promote as a cure-all for teenagers’ sexual malaise. And don’t even get me started on the Alien movies, and the fact that Sigourney Weaver’s character enjoyed just one (human) sexual encounter in the entire series — in Alien 3, right before her paramour was engulfed by the monster she’d brought along for the ride.

Compared to all these, The She-Creature may seem almost quaint, a lingering specter from the age of low-budget camp. But its wacky, underproduced scares still have a cutting edge, in that a woman’s powerlessness is gradually revealed to be the greatest illusion of all, and it’s worth watching and remembering as a yardstick to measure how far we may — or may not — have come.

For a full schedule of The She Creature on AMC, click here.