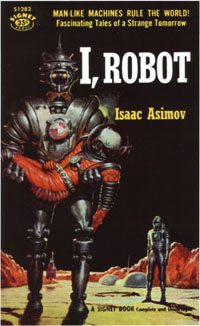 A robot may not injure a human being or, through inaction, allow a human being to come to harm. A robot must obey orders given to it by human beings, except where such orders would conflict with the First Law. A robot must protect its own existence as long as such protection does not conflict with the First or Second Law. These are the three laws of robotics; established by Isaac Asimov in his infamous collection of short stories, I, Robot.

And these words are inscribed on the hearts of science fiction devotees thanks to the profound effect of Asimov’s stories on the development of robots in literature as complex personalities rather than the murderous, Frankensteinian automatons they were in danger of becoming.

Modern science fiction media, not just literature, owes a great deal to the influence of I, Robot. Without the Three Laws there would be no lovably quirky Data, no Replicants, no foul-mouthed Bender, and no prim C3PO. All technically androids, yes, but androids who owe their humanoid likeness’ to Asimov’s sympathetic robot menagerie and the emotions they were capable of inspiring. By forcing society to question the very nature of robotics (a word first used in print by Asimov) I, Robot made formerly monstrous machines characters with whom readers could empathize and identify, thus helping to lay the foundations upon which today’s cavalcade of mechanized characters now rest.

Sadly, in spite of this great contribution, influential literature isn’t what comes to mind when most people hear the words I, Robot. Instead, any reference to the collection by name is likely to conjure images of automatic vacuum cleaners or Will Smith’s cinematic antics in the film adaptation — an adaptation which only begins to bear the faintest resemblance to Asimov’s work after a night of heavy drinking followed by a savage blow to the head. Thankfully the universe retains its sense of irony, and the film is more true to Eando Binder’s original I, Robot — an unrelated short story from 1939 which bore the same name — than any of the tales from Asimov’s 1950 compendium.

Yet hope abounds in the form of children, who by dint of prolonged exposure, are sure to reap the benefits of classic scifi literature.