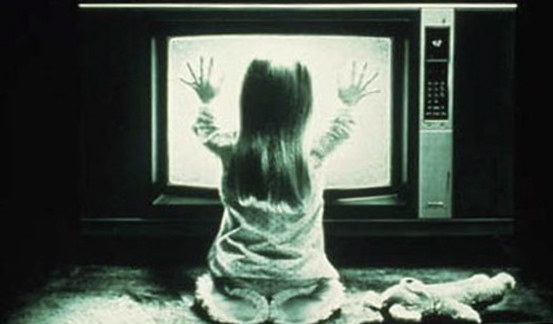 As you’re well aware by now, I live the entirely fabulous life of a horror movie blogger. I know what you think that entails: I jet off to the premiere of One Missed Call , uttering witty bon mots about Night of the Living Dead 3-D whilst swathed in diamonds and pearls. It’s true, the life of a horror blogger is indeed wicked glamorous, but I’m about to reveal a fact about myself that may come as a bit of a shock to you, so hold on to your mama and prepare your fainting couch: I don’t own any property. I’m not a home-owner, I’m a home-renter.

I appreciate your pity, but I assure you it’s entirely unwarranted. I own a copy of Killer Workout on VHS, and that’s all I really need. Besides, who wants to own a house? Houses get haunted, yo. I mean, have you seen House on Haunted Hill ? Or The Legend of Hell House ? Or The Haunting ? Or The Haunting of Hell House? Even if a house isn’t technically haunted, you can be sure it’s nicely stocked with corpses, in numbers ranging anywhere from Seven to 1,000. Consider my case rested!

I’m not here strictly to warn you folks about the dangers of the houses themselves, though. Oh no, I care much more than that. I’m here to let you know that there could be evil lurking within your house right this very minute within the most innocuous of places: In your furniture and other assorted household items. If you’ve ever thought to yourself, “Hmm. Is my fork lookin’ at me funny?” I’m here to tell you, yes. Yes, it is. Your fork hates you and it’s just waiting for you to drop your guard before it thrusts itself into your knee.

The Television
We’ve all seen the “Kill Your Television!”
bumper stickers. We’ve all been told that TV will rot your brain and if
you sit too close, it’ll ruin your eyes. But the idea that television
really, truly something to be afraid of hits home nowhere harder than
in Tobe Hooper’s Poltergeist .
The days of channels actually signing off and going snowy seem to be
long over in the age of cable, but the point still remains: If your TV
starts whispering to you, don’t answer. Don’t touch it, don’t stare at
it, don’t say “Just one more episode of America’s Next Top Model…”
Friends, put that bastard in a dumpster as fast as you can, and
discover the joys of reading — lest you end up mingling with the dead,
covered with Afterworld Jelly. That’s just gross.

The Mirror
And
we’ve all given in to vanity at one time or another: Perhaps you’ve
said “Gee, what a form-flattering outfit this is I’m sporting today!”
Spend too much time gazing at your own reflection, however, and you
could do a lot more than simply alienating your friends — you could be
staring into a portal into terror! This is the notion behind the Mirror, Mirror series, which began way back in 1990. This is also the notion behind Amityville: A New Generation;
yes, folks, the evil of the Amityville house actually seeped into all
of the items within the house, resulting in Amityville-style mayhem
everywhere. If the Amityville mirror isn’t deadly enough for you, then
how about the Amityville lamp of Part IV: The Evil Escapes?

Yes, a lamp. Terrifying, isn’t it? If only some enterprising soul would take the reins on Amityville 10: It’s About Tupperware. I’m shuddering in my shorts already! We all want fresh food, but at what cost? Is it worth your soul?

Speaking of food, we’ve all, at one time or another, eaten some. However, if said food were stored in  The Refrigerator,
we might find ourselves the chompees instead of the chompers. The
bright side is, a killer refrigerator would make a great diet aid. The
down side is, The Refrigerator is a terrible film — despite the fact that it features a character called “Guy Who Went ‘Oops’.”

The Bed
We’ve all used a bed for various bed-related purposes: Sleeping,
bouncing, watching TV comfortably … and whatever other uses you kids
might have for beds that I completely claim ignorance of because my mom
is probably reading this. But what happens when the bed grows tired of
giving and giving and getting nothing in return but a saggy middle? The
bed kicks your ass, that’s what happens! Exhibit A: Deathbed ,
the bed that eats. My years and years of horror movie watching have
given me the arcane knowledge required to devise a way to outwit the
deathbed, however. Get out your pencils and jot this down, kids, in
case you ever find yourself in the presence of a bed that eats and
you’re not in the mood to get eaten. Ready? Do not go near the bed.
Keep that written on notecard stored in your wallet and turn to it in
your time of need. Seriously, that should be enough. I don’t think you
have to worry about the deathbed following you home or popping up in
your backseat when you foolishly forget to check back there.

I’m looking forward to the May 27 release of The Chair,
a film about… umm… an evil chair that I hope will carry on the fine
tradition of killer home furnishings. I’ve yet to see the film but I’m
already fantasizing about a sequel, which I hope will contain an evil
dinette set. That’s six-to-eight times the terror!

Ultimately,
what’s the solution when both houses and the items within them have the
potential to kill? To be honest, I’m not sure. I don’t have all the
answers, you know, even if I am living the noble life of a horror
blogger. Maybe we should all look into the wigwam lifestyle?