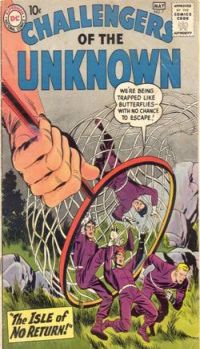 Iron Man‘s success, both critical and commercial, has opened the floodgates for comics on the big screen. Right now studios are asking, if Iron Man can headline a film, why not Ambush Bug? Okay, maybe not Ambush Bug but Shellhead has reignited interest in some long dormant projects, including the John Singleton and Tyrese Gibson Luke Cage movie. (Though, uh, don’t hold your breath for that Singleton and Wesley Snipes Black Panther film. It’s safe to say that one’s in turnaround.) But there are still plenty of worthy comics and characters out there waiting to be transformed into the next hit franchise.

Here are just a few suggestions for comics begging to be adapted to film. But, please Hollywood, don’t forget to actually read them. You too, gentle reader.

Challengers of the Unknown
Okay, this one’s a no-brainer. Created by comics legend Jack Kirby (Captain America, The X-Men), Challengers has a zippy “ Final Destination meets The Fantastic Four” concept: After surviving a plane crash unscathed, four adventurers living on “borrowed time” team up to take on various bizarre challenges. The team has battled everything from robots to the Bermuda Triangle. And they live in a secret mountain headquarters. Shockingly, Challengers has never been adapted in any form outside of comics. (It would also make for a pretty swell animated series.) And the concept is pretty malleable. Cast four up-and-coming actors, get a director who can handle a mystery, then sit back and enjoy the huge opening weekend take.

Ex Machina
Comics superstar (and current Lost writer) Brian K. Vaughn is a fountain of high-concept, blockbuster-friendly ideas. He’s also a terrific writer who creates unforgettable characters. Hollywood has already gotten wise to this, with adaptations of his Y the Last Man (possibly starring LaBeouf) and Runaways series in the works. But it’s his “ Rocketeer meets The West Wing” series for Wildstorm that could really make for something unique in celluloid. Mixing politics and high action, Ex Machina follows a superhero who becomes mayor of New York City after saving one of the Twin Towers during the September 11th attacks. That’s a future I’d like to be a part of.

Fables
Bill Willingham and Mark Buckingham’s “fairy tale characters in the real world” series is the best thing DC/Vertigo is publishing right now. Mixing fantasy, romance, crime, and satire, the 73 issues and counting of Fables (plus the spin-off Jack of Fables) offer a wealth of stories for an entire franchise. You could have the next Lord of the Rings on your hands here, Hollywood. Or, you know, you could just steal the idea since the characters are all in the public domain.

Green Arrow
Apparently, Green Arrow will be starring in a film, getting thrown into a prison full of supervillains. While an interesting concept, it doesn’t quite fit Ollie Queen’s character. Basically a more liberal Batman, Green Arrow is an underrated character in the DC stable. Play him straight, and lift from the excellent Mike Grell comics of the late ’80s, and a Green Arrow film could rival even Batman Begins . (Plus, what fanboy doesn’t want to see Ollie’s longtime girlfriend/current wife Black Canary and her fishnet stockings on the big screen.)

The Tick
Yes, the funniest superhero comic of all time was already adapted into both an excellent animated and live-action TV series. But superhero comedy on the big screen is at an all-time low right now. (You can thank Superhero Movie for that.) Why not reunite the cast from the TV series (including the always hilarious Patrick Warburton) for a big-screen outing? (Hey, they’re making an Arrested Development movie. A man can dream.) There’s life in Ben Edlund’s enduring creation yet. Say it with me…Spoon!

Alias
No, not the Jennifer Garner TV series. Brian Michael Bendis did some of his best work on Marvel’s gritty superhero detective series, following former superheroine Jessica Jones and her encounters with everyone from Captain America to J. Jonah Jameson. The real-world detective approach to the series could make for a moody megahit. And the character’s tortured backstory could also be Oscar material. (Jennifer Connelly, this is your ticket to another nomination.)

Nick Nadel has written for The Huffington Post, AOL, VH1, The Onion, Toyfare Magazine, and HBO’s ThisJustIn.com. He’s still holding out for that Ambush Bug movie.