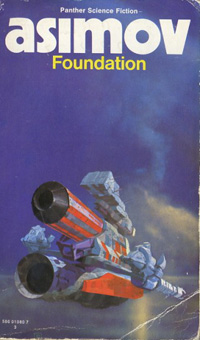 The series of novels and short stories that would become the Foundation series, Isaac Asimov’s magnum opus spanning 50 millennia of human civilization, had an innocuous and humble start. As Asimov told it, the idea came to him when flipping through Edward Gibbon’s The History of the Decline and Fall of the Roman Empire during a cab ride to the offices of editor John W. Campbell of Astounding Magazine. Asimov — still green behind the ears as a young sci-fi writer — thought the tale of an intergalactic civilization’s decline into the dark ages would make a great quick pitch… an intriguing enough idea to secure him a few months work. Little could Asimov have guessed that a simple pitch for a short story would keep him with more work than he knew how to complete for the next half a century.

A series as pantagruelian as Foundation is hard to summarize (the universe in which Foundation
takes place is collected into no less than 25 different books) but the
gist is this:

Mathematician Hari Seldon spends his life developing a
branch of experimental mathematics called psychohistory, which can
predict the future with great accuracy using the law of mass action,
but only on a massive scale — a single person’s future can not be
predicted psychohistorically, but a galactic civilization’s can be.
Seldon quickly realizes with his new found mathematical formula that
the Milky Way-spanning Galactic Empire will soon fall, leading to a
dark age of thirty-thousand years before a Second Galactic Empire arises.
So he comes up with a grand scheme: Avoiding the collapse of the galaxy
is impossible, but the length of the Dark Ages might be minimized if
art, science and enlightenment were propped up with two planetary
foundations… dual havens of truth and beauty on opposite ends of the
galaxy. Seldon hopes that his scheme will reduce the length of the
galactic Dark Ages to a mere thousand years, instead of thirty-thousand years.

It’s certainly an ambitious plot, and Asimov wrote eight stories set in the Foundation universe between 1942 and 1950, which were ultimately collected in novel form as Foundation, Foundation and Empire and Second Foundation. But Second Foundation
ended with only a few hundred years passing since the fall of the
Galactic Civilization, leaving 700 years of plot unaccounted for. Fans
clamored for the conclusion, but Asimov had no more ideas for another
30 years, before finally producing two more novels: Foundation’s Edge and Foundation and Earth, which bring the Foundation
series up to the end of the Seldon plan. Then, not content to leave it
there, Asimov started working on the prequels. And just in case fans
weren’t satisfied with that, Asimov decided to tie together his Empire, Foundation and Robot series into one cohesive science fiction universe spanning fifty-thousand years of human civilization.

Needless to say, the cultural impact of the Foundation
series is almost as significant on the science fiction genre as the
foundation planets of the novels themselves. Douglas Adams’ Hitchhiker’s Guide to the Galaxy is a spoof of the Encyclopedia Galactica, the massive encyclopedia compiled by the scientists of Seldon’s foundation planets. The Encyclopedia Galactica is even mentioned by the Hitchhiker’s Guide by name, along with Foundation’s city-planet Trantor… which in and of itself proved to be the inspiration for the Star Wars series Imperial capital world, Coruscant. The dark Imperium of Man empire from the Warhammer 40,000 series of games and novels is based on the Foundation series, and even the holophonor from Futurama was plucked right from the pages of Asimov.

But for all that, Asimov’s Foundation novels have never
been adapted into film. New Line Cinema came close: They spent $1.5
million developing a trilogy of the films in 1998, but ultimately opted
to develop The Lord of the Rings instead. Perhaps it’s for
the best — who really wants to see the decline, fall and resurrection
of humanity’s galactic civilization compressed into six hours when even
Asimov’s 25 novels barely did the epic concept justice.