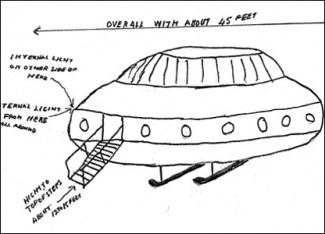 They spent years denying the existence of DI55 (a secret unit dedicated to investigating UFO’s), but now the UK government says it has nothing to hide. Last week, it released over 1000 pages of secret UFO documents to the public and over the next four years will post their entire archive dating back to 1978. The truth is now out there, if you choose to believe it.

The papers might help someone like Mulder believe, but a skeptic like Scully will remain unconvinced. The drawing here comes from file 24-1925 and recounts the close encounter of a 78-year-old man taken on board an alien craft in 1983. (For other interesting images go to BBC News). While fishing, he claims he was nearly abducted by aliens “about 4-feet-high” and “dressed in pale green overalls from head to foot” but was let go after one of them said, “You are too old and too infirm for our purpose.” Then —  as if to remind us that this was a British abduction — the man says he went back to drinking his tea.

Those looking for proof of a conspiracy theory won’t find
it here: A 1979 government briefing for the House of Lords dismissed
the idea saying:

The idea of the inter-Governmental
conspiracy of silence is at once the most astonishing and the most
flattering claim of all. On so few things can the Governments of the
world agree unanimously, but they have all supposedly agreed to conceal
the evidence of UFOs from their peoples. Let me assure this House that
her Majesty’s Government has never been approached by people from outer
space.

One man claims he tried to arrange a meeting
between an alien and the British Government, but unfortunately, Algar
(the alien) was killed by other aliens in 1984, before the meeting took
place.

Some accounts are more credible than others. One of
the few unexplained encounters comes from air traffic controllers. One
said “the object came in ‘at speed,’ made a touch and go on runway 27,
then departed at ‘terrific speed’ in a ‘near vertical’ climb.” There
are multiple accounts from police officers and even military pilots.
The Ministry of Defense says it “does not consider questions about life
on other planets” and tracks the sightings “solely to establish whether
U.K. airspace may have been compromised by hostile or unauthorized
military activity.”

The documents can be downloaded for free for one month and are the perfect prep for July 25’s X-Files: I Want to Believe.