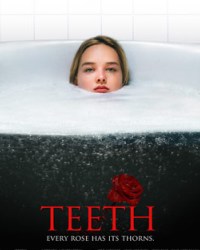 Maybe you already saw Teeth maybe you didn’t… but either way, you’ve probably already cracked a joke about it. Mitchell Lichtenstein’s vagina dentata movie rode a wave of one-liners to the top of many people’s 2007 must-see movie lists, and arrives on DVD today. Lichtenstein took a break from filming his new movie (Happy Tears, starring Demi Moore and Parker Posey) to comment on whether fans of the radiant Jess Weixler can look forward to more Teeth turns in the future.

Q: Teeth was gratefully received by horror fans, and they have a long memory. Do you have plans to return to the genre anytime soon or revisiting the story?

A: Conceivably. It’s left sort of open-ended so that there could certainly be the further adventures of Dawn, but I don’t quite know what they would be yet. I don’t want her to turn into Aileen Wuornos… but I enjoy the genre so maybe I’ll come up with something.

Q: The special effects were pretty graphic. Did capturing an R rating impose constraints on your creativity?

A: No, because I didn’t have any obligation to get an R rating. It, luckily, did get one.

Q: Did that surprise you?

A: Yes, it did! We all thought it would be NC-17, but the ratings
board was really behind the movie. They thought it was a cautionary
tale and that parents should bring their teenage sons to see it; it’s
made clear that if your intentions are honorable, things will go well,
and if not… [laughs]. They really latched on to that aspect, and I
was thrilled, because it is part of the movie. There was one specific shot I had to plead for, which is the one near the end… [details omitted that would spoil the movie and your lunch]. That was the only shot they had a problem with, so I was surprised.

Q: Last question. This is a genius merchandising opportunity; can we look forward to a video game tie-in? Action figures?

A: I would love that! It could be sort of like Ms. Pac Man, gobbling
up… uh. [Laughs] We had some big ideas at one point, we were thinking
about things like Dawn pencil-sharpeners.