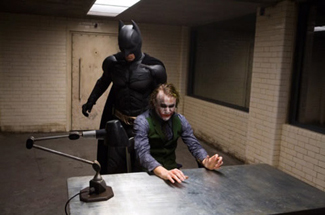 For those of you who miss the good old days when there was some sort of trailer mashup emailed to you every day… get ready for the non-stop barrage of Dark Knight mashups!

• A rather brilliant mashup of the first Dark Knight trailer, with footage from the old Adam West television show.
• A version created entirely out of Legos.
• College Humor called out the similarity between the trailer, and Tim Burton’s original movie, with side-by-side comparisons. (To be fair, and so there’s no confusion, the footage that represents the Burton Batman is heavily edited with clips from the rest of the movie, but it’s still interesting to watch.)

Now, with the Dark Knight‘s second trailer officially on the net, plucky young editors have taken the past week to cobble together a new batch.

• Funny or Die has put together, “In The Company of Batmen;” I think you can figure out what this one is about, without even watching it.

• Our friends over at Geekanerd created the original “The Dark American Psycho Knight,” which could be considered not safe for work. Depending on where you work.

The 300
trailer mashups were next. Again, some were more successful than others,
but this was a clear advancement of the form. It was even more
popular than the Brokeback craze, which you can clearly see from the fact that it inspired an entire movie, Meet the Spartans.

Which brings us to the most recent slate of TDK mashup videos.
In order for a parody to work, the majority of the population must be
aware of the what your parodying. As it happens, this summer, most of
the population is aware of The Dark Knight.

Will the trend continue? Will we see as many mashups as there were for TDK’s
predecessors? Only time, and the nimble editing fingers of the
Internet’s many parodists will tell. Personally, I’m just looking
forward to, “10 Things I Hate About the Joker.”