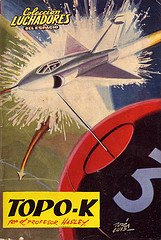 • The reviews of Indy IV may not be good, but the toy tie-ins sure are: own your own toy Crystall Skull projector.

• SF Signal points us to the Heroes Season 3 propaganda bomb.

• Robert Orci talks about Star Trek XI and Transformers 2. The latter has Soundwave!

• The best Doctor Who writer (not saying much) will be replacing Russel T. Davies in 2010.

• Philip K. Dick’s Ubik may be coming to theaters soon.

• Yes, that is E.T. jumping the General Lee.

• io9 acquaints us with the seven types of bad bosses according to Trek.