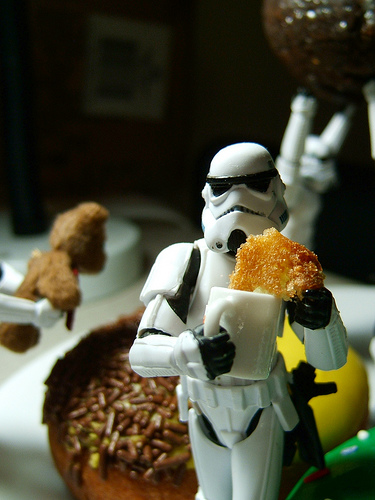 • io9 looks at the largest mega-sentients in scifi.

• Zack Synder has posted the second video journal for Watchmen.

• Just a reminder that the Star Wars: Clone Wars two-minute trailer will be simultaneously aired tonight on the Cartoon Network, TNT, TBS, CNN and Boomerang.

• A chronological listing of all the Season Four Battlestar Galactica episodes.

• A gigaton of new Indiana Jones and the Kingdom of the Crystal Skull pics have been released to scrutinize for scifi minutiae. Hard to believe that in only a couple weeks, we’ll know for sure if it even has an alien in it.

• A pirouetting ballerina, dancing with a robot snake.

• Michael Bay says there will be no transforming aircraft carrier in Transformers 2. You haven’t even started filming yet, Bay: Couldn’t you take some of the better ideas?

• A fascinating new blog devoted to Islam and Science-Fiction.

• What is the secret life of Lilliputian stormtroopers?

• A look inside Lucasfilm’s ILM campus.

• The Japanese Cloverfield manga has been translated for your amusement.