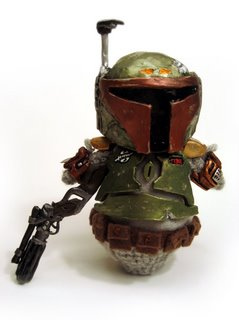 • Bertie Wooster as a early adopter post-humanist? Throw in an Asimovian Jeeves while you’re at it.

• Shadow Unit: “It’s a series “no one had ever seen. It would share DNA with ‘Criminal Minds,’ with ‘The X-Files’ and ‘Millennium,’ with ‘Man from U.N.C.L.E.’ and the old paramedic show ‘Emergency” to name but a few.

• Some pretty heady spoilers for the ninth episode of Battlestar Galactica.

• Cyclops will apparently appear in the upcoming Wolverine movie.

• This bodes ill: Matthew McConaughey is top of the list to play Captain America.

• Was Mick Jagger in the running to play a droog in Clockwork Orange?

• Ten years later, Time Out looks at The Matrix.

• George Romero’s prescient tale of sci-fi epidemic, The Crazies, is being remade.

• The most adorable Boba Fett Amigurumi.

• Well, she’s certainly comfortable with the ‘f’ word: Paula Malcomson from Deadwood is cast in Caprica.

• Matt Groening does a surprisingly weak adaptation of his Futurama characters into heroes from Mike Mignola’s Hellboy.

• Finally, SciFiDrive looks at singing and grooving in scifi… with video!