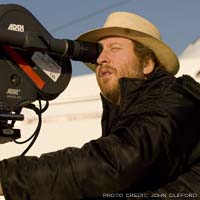 Known for his gritty crime dramas, James Gray’s latest offering, Two Lovers, is anything but. Set in Brooklyn, the film follows a heartbroken young man (Joaquin Phoenix) who returns home after a suicide attempt only to discover two new love interests, one of whom is as troubled as he. Gray talks about the film’s roots in 19th century Russian literature and his views on the nature of love.

Q: Two Lovers is a big departure for you.

A: At a certain point, you have to change it up a little bit. And I had, frankly, gotten sick of the macho element in the stories. It was inspired in a weird way by Gwyneth [Paltrow], because right after I had made The Yards , we were talking about working together and she said, “But we can’t do that because you only make movies with guys shooting each other and yelling curses.” And I remember thinking to myself, “Wow, she’s right.” By that time I was already writing We Own the Night, so I finished that movie and said, “No more.”

Q: You’ve been adamant in pointing out this is not a romantic comedy. Why is that important?

A: There are very few American films — very few films, period — that tackle romance with a seriousness of purpose. I think it has to do with the fact that being in love is an altogether preposterous state of affairs. When you are in love, you do and say insane things, and there’s no place for logic. Comedy is a perfect vehicle for that, because comedy is about the real extremes of human behavior. And so it was the ultimate challenge to me to make the film, which, by the way, does have a lot of comedic elements in it, but nonetheless take a serious approach to the subject.

Q: The film actually has roots in Russian literature: Dostoyevsky’s White Nights. What about that story inspired you?

A: I used that as a springboard; it’s inspired by it very loosely. The main character of the Dostoyevsky novella is someone that in 19th century Russia would have been just, you know, weird, and today would be greeted with a whole host of psychoanalytic terms: Manic depression, bipolar disorder. So if Dostoyevsky were writing today, he would be having to treat his characters with a whole host of pharmaceuticals. Joaquin and I talked very seriously about updating the Dostoyevsky conception: A slightly manic person would be a metaphor for how we behave when we are in love.

Q: Do you worry that by diagnosing the main character as
psychologically unsound, his actions will be attributed to the
psychosis, not love?

A: I’m sure it will make some people say that. Others might realize that even though we call him bipolar in the movie, which we do, he is not different from any of us. What was intended was a comment on human relationships and the nature of being in love, that our desire for another thing or person is really a statement about what we lack within us.

Q: The film also tries to distinguish between love and lust.

A: I was trying to impress upon the viewer the idea that social class, physical appearance, dress… are all elements that establish both a sexual and a familial connection. In other words, if I had met my wife at a party — which I did — and she were dressed differently, then maybe I would never have even met her. Because all sexual attraction in some way comes down to a certain fetish. Each character is in love with the other person on the basis of a series of preconceptions that are ferociously subjective.

Q: Is the story a personal one?

A:  When my wife and I first decided to have children and she got pregnant, we had to take a whole host of genetic tests. The genetic counselor told us that she’d seen all these couples that were both positive [for Tay-Sachs disease] and how devastating it was for them. And then I started to think about how that would be: A young man who had been heartbroken because a close relationship all of a sudden has to end — they won’t have children together and she won’t adopt — and that heartbreak leads this young man into a depression.

Q: This is your third consecutive film to be nominated for the Palme d’Or. Why do you think your movies are such a natural fit for the festival?

A: I don’t is the curt answer, but also the right one. I don’t ever expect to win anything; I didn’t even expect this film to be done. I finished the film 20 hours before the screening. But you know, the Cannes people called, “We want zee feelm, we want zee feelm,” so next thing you know, I’m here.