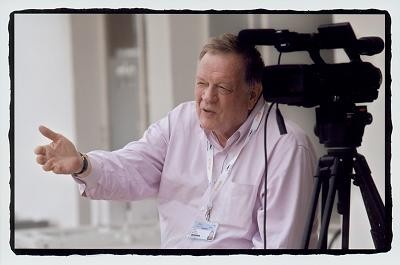 Richard Schickel has authored over 30 books and directed over 30 documentaries about the movies; he’s also Time magazine’s senior film critic. His five-hour retrospective on Warner Bros., You Must Remember This: The Warner Bros. Story, is now screening at Cannes. Schickel spoke with AMCtv.com about his lifelong love affair with the studio.

Q: An accompanying book is also being released simultaneously. How do the two relate?

A: It’s a huge book — over 500 pages. Like us, they have access to the Warner Bros. archive, which is a huge advantage. You have the full run of every movie the studio ever produced and all the stills that have accumulated there, so it allows you to do something with enormous scope, both on television and in the book. I say we’re producing an oxymoron: It’s an epic clip show. You have 85 years of history and you’ve got the business history of it, the family history of it, the history of the movies themselves.

Q: Clint Eastwood narrates the documentary. How did he get involved?

A: Clint and I have been friends for 30 years. He was enthused about it from the beginning, and dropped the word around the studio that he thought it was a good project and they ought to get behind it. He’s kind of the executive producer of the show, and I’m going to credit him as such because he’s just been helpful in dozens of ways with this thing. If you have the enthusiasm of what amounts to a studio legend behind your project, it’s more than helpful.

Q: Why Warners? What’s your attachment to the company, aside from the fact you’re a critic for Time?

A: I always thought from the time I was a kid that Warner Bros. was the great studio. To take one el primo example, I even liked Bette Davis. I mean, little boys aren’t supposed to particularly like Bette Davis, but there was something about her, that weird energy she gave off. And I loved Errol Flynn. I thought he was dashing and gallant and very attractive as a leading man in those kinds of historical epics. So I was just drawn to that studio. It spoke to me in a way that maybe MGM or 20th Century Fox did not. It really is a kind of lifelong love affair.

Q: What are some of the big changes you’ve seen the studio go through over the years?

A: Warner Bros., before they started enforcing this stupid production code, was just wild. Before 1934, there’s drug use openly and casually referred to, there’s plenty of sexual misadventure going on, they’re even quite violent by the standards of the time. They’re very tough movies, and therefore, truthful. I don’t think Warners in those days was making escapism. I mean sure it was, but it was never a studio that was big on comedies, and Busby Berkeley films aside, it was not huge on musicals either. The lighter fare was not what Warner Bros. was about. It was about being serious about all kinds of personal and public issues, whether it was hookers or gangsters or just deeply exploited people. What I like is that through the years, it has challenged the way things are, and that continues into the modern times.

Q: How do you see Warner movies today?

A: Movies in general — and this truly isn’t just Warner Bros. — they’ve become something different. They’ve become events. When stakes are raised in that way, some of the values inherent in traditional Warner pictures are bound to be somewhat depreciated. I understand there’s a threatened community in The Matrix, but on the other hand, it’s such a spectacle. But you know, they’re still making Million Dollar Baby. And Clint’s got a wonderful picture coming out called Changeling. It’s about a lone human being fighting the corrupt establishment. You could have made that movie in 1935 at Warner Brothers. It would look different, but it would be the same essential message being promulgated.

A: I Am a Fugitive From a Chain Gang. God, it’s just such a brutal, wonderful film. This poor guy looking for work, he’s accidentally involved with some guy who’s sticking up a lunch wagon. Next thing you know, he’s on a chain gang someplace. He escapes from the chain gang, goes and establishes himself as a construction boss. He’s got a nice girlfriend, he’s wearing suits… and they lure him back, and he’s back on the chain gang. There’s no justice. He’s on the run at the end of the movie.