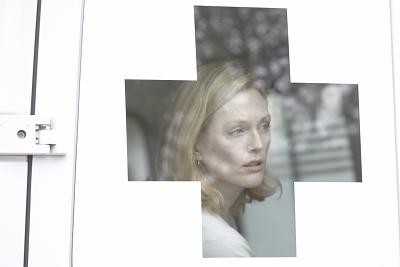 Perhaps Blindness was an odd choice to open the Cannes Film Festival. Director Fernando Meirelles (City of God) thought so: He said at a news conference after the screening of his grim drama,  “To be honest, I still don’t think this is the best film to open a festival.” Nevertheless, his tale about a mysterious disease that strikes the majority of society blind was front and center last night at the premiere. The film examines society’s descent into chaos when the disease prompts a shocking and dehumanizing response from the government — victims are rounded up, sent to internment camps, and stripped of their identities — and in the wake of disasters like Hurricane Katrina, the 2005 tsunami and the crisis in Darfur, leaves little allegory up to interpretation.

“The story deals with something we have to confront, which is our own inability to see what’s going on around us,” Blindness co-star Danny Glover told the BBC. “When I was born, there were 2.5 billion people in the world. Now 2.5 billion people earn less than $2 a day and we don’t see that. We’re blind to them.”

This film has been a pet project of Mereilles for quite some time. Based on the novel by Portuguese Nobel Prize Winner Jose Saramango, the director had tried to buy the rights to the story before he had even attempted to make a feature film, only to be turned down by the author who believed that cinema destroyed imagination. But Mereilles persisted because “I like the idea of the fragility of society,” he explained to the Los Angeles Times, “of how primitive we are as human beings. We have a little cover of sophistication and without it it’s all about survival.”

In the second half of the film, prisoners living in blind squalor and hunger turn on each other. The only person unafflicted is star Julianne Moore’s character, who sneaks into a camp to be with her husband, but soon becomes a matriarch among the inmates. She too, has her demons, as Moore explained to the BBC: “I wanted her to walk a line between responsibility and irresponsibility,” she said. “There are some things that she does that are quite brutal and vigilante-like. But in heroism, sometimes people get hurt who are not in the circle we are protecting.”

A film that shines a harsh light may not have been the obvious choice to kick off a glitz-filled week, but as Reuters reported, festival juror and outspoken political activist Sean Penn had these words of reminder following the film: “Whatever we select for the Palme d’Or,” he said of the top prize, for which Blindness is in competition, “We’re going to feel very confident that the…maker of that film was very aware of the times in which he lives.”