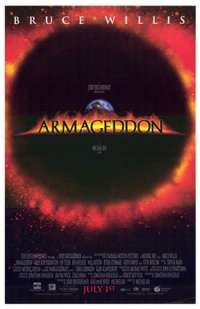 Are you worried about an asteroid hitting the earth and wiping out mankind? You should be. Astrobiologists at Cardiff University suggest that the way our solar system keeps “bouncing” around, it’s only a matter of time before a meteor shower rains on our parade. The good news is, if we do find ourselves under attack, Canada’s got our back.

Hollywood’s solution to an earthbound asteroid has always been the nuclear option — blow it up before it hits the earth. Armageddon was directed by Michael Bay, after all. It might be entertaining but Intuitor’s Insultingly Stupid Movie Physics gave the film a rating of XP (obviously physics from an unknown universe), and described it as “a feel-good movie with comic book physics that performs a serious public disservice by trivializing one of the worst long-term threats to human existence.”

While Bay’s film and some scientists are looking at defensive plays (Are mirrors the best way to deflect asteroids?)
Canadians are trying a different approach. The Canadian Space Agency
plans to launch the first space mission to hunt asteroids. And,
according to New Scientist, they’ll do it using a Near Earth
Object Surveillance Satellite (NEOSSat) that’s the size of a suitcase
and costs a mere $10 million to make. To put it in perspective, the
budget for Armageddon was $140 million.

The
microsatellite will search out near-Earth asteroids that could be
dangerous or are difficult to see from the ground due to their
proximity to the sun. “This is the first space-based asteroid-searching telescope, period,”
said Alan Hildebrand, one of two principal scientists for the
satellite. More importantly, Hildebrand expects it to find asteroids
that are accessible from Earth for further research.

There’s only one problem. The NEOSSat will launch in two years time.